An in-depth look at the Pirates outfield positioning

Following last night’s loss to the Giants, there was some discussion regarding the Pirates’ outfield defensive alignment. The team used this shift for the majority of last season, primarily at PNC Park. It has occasionally drawn criticism, generally during instances when it is unsuccessful. From this morning’s Post-Gazette game summary:

Five of Burres’ first six batters reached, and San Francisco leaped to a 3-0 lead, but he might not have been wholly responsible: Russell and his staff tried a shift of all three outfielders toward right, even against right-handed batters, and the Giants dropped their first two hits into left before the shift was removed.

“You try to take away the bigger part of the ballpark,” Russell said of the shift. “Those balls are hit right down the left-field line, and they’re going to be doubles, anyway.”

That was true of later San Francisco hits to left, but not the two during the shift in the first: Aaron Rowand’s leadoff double and Mark DeRosa’s broken-bat, two-run single fell well within Lastings Milledge’s good range, had he been in standard position.

Here are screen shots of DeRosa’s first inning single that Dejan refers to in the final paragraph: 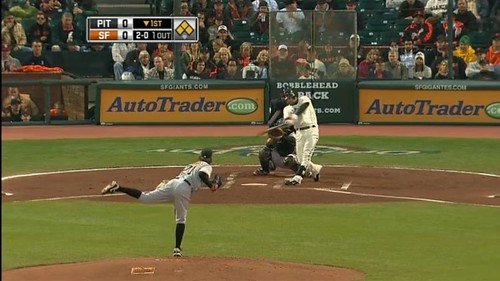 DeRosa puts the ball in play in this shot. 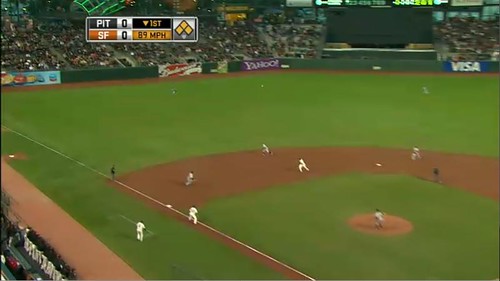 We get our first glimpse at Milledge in the second frame. Just eyeballing it, he does not seem to be too far out of position. He is shifted a tad toward left-center, but nothing absurd. This makes sense, as DeRosa is a bit of an opposite field hitter. 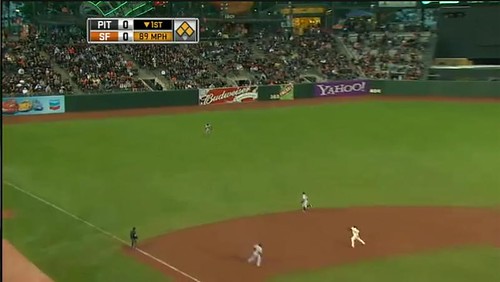 It is tough to get a good read from these screen shots, but it looks like Milledge took a somewhat circuitous route to the ball. He initially started directly to his right, probably misreading the flare due to the broken bat. 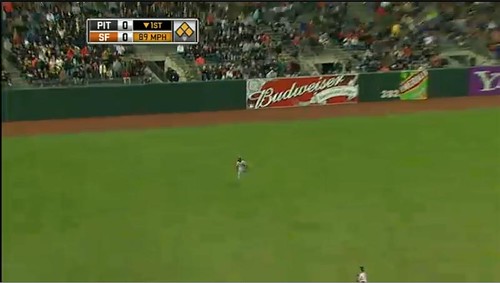 He desperately sprints toward the infield… 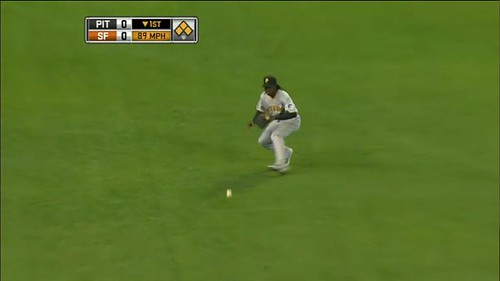 …but comes up short. This is simply a case of a batter hitting away from his scouting report, plus a bit of a misjudgment by Milledge. In other words, mostly bad luck.

Let’s get away from specific examples. The Pirates are playing the long-term percentages with their “no-triples” defensive alignment. Sometimes, they will get burnt, as was the case last night. Other times, a fly ball that should not be caught, will be caught. The Pirates are counting on the latters outnumbering the formers. Let’s see if that is a good strategy.

The following diagrams represent every ball put into play at PNC Park over the past two seasons. I removed home runs, ground balls and pop-ups to clean things up a bit. This had no impact on what we are examining. 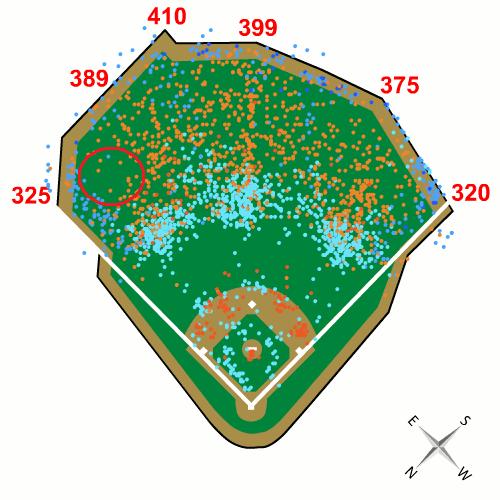 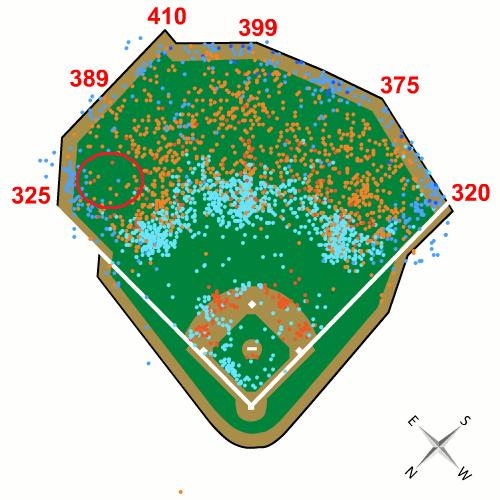 The red circle represents the area that the Pirates are opening up with the alignment, in order to shut down the left-center field gap. The balls hit right down the line will always be doubles, regardless of the defensive positioning. As you can see, there were only a few balls hit into the circled zone. This is true for both years. The Pirates are clearly willing to give up those couple of extra hits to better cover the more populated left-center gap.

I only had access to data for 2008 and 2009, so I can’t be sure that this is a reliable pattern. I assume the Pirates used a larger sample before deciding to use the shift. The Bucs probably should not make a major adjustment when playing on the road, as it does not seem that it would be beneficial. I checked a few other parks, but no others showed a trend similar to PNC Park. For example, here is AT&T Park in San Francisco: 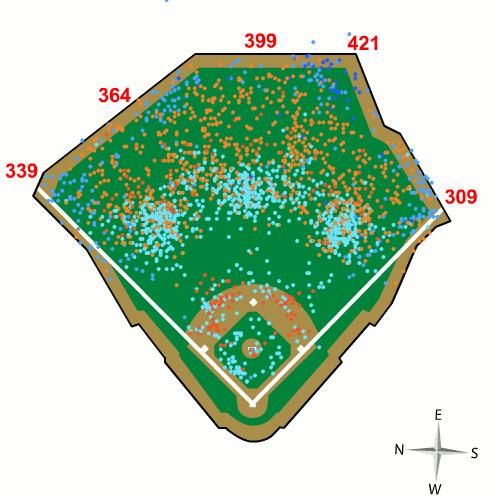 This situation is similar to the “pitcher batting eighth” debate. It is an unconventional method, so our first reaction is that it is wrong. When the pitcher’s spot comes up with two outs and the bases loaded, it sticks out in our mind. When the ninth hitter leads off an inning and initiates a rally, we barely notice. When a lazy fly ball drops harmlessly onto the left field grass, it sticks out in our mind. When Milledge runs down a deep drive at the wall in left-center field, we barely notice. 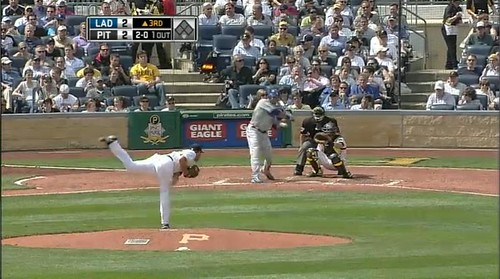 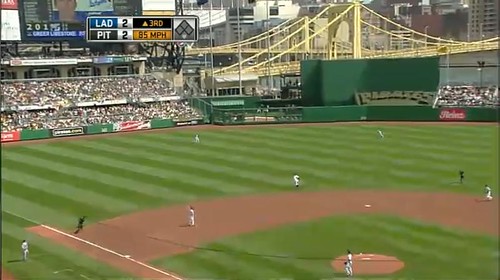 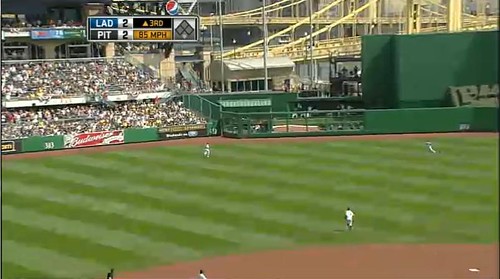 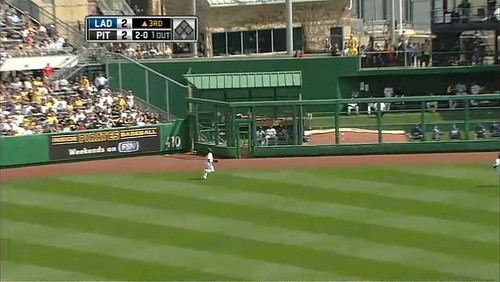 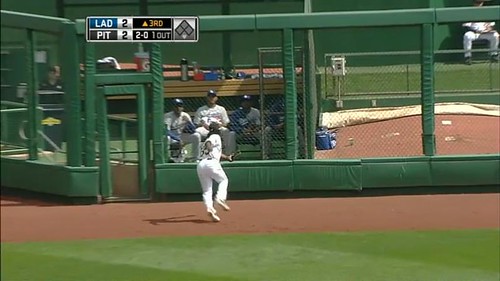