Is Charlie Morton tipping his pitches from the stretch?

As Pat pointed out a few weeks ago, Charlie Morton has struggled mightily with runners on base this season.

These numbers were from Morton’s first two starts, but the trend has continued to the present. Whether it has been due to bad luck or some other factor, Morton has been abysmal with runners on base.

On Friday, Morton served up a first inning, two-run home run to the Dodgers’ Andre Ethier. The blast came on a decent pitch, 92 MPH with good movement, painting the inside corner. During the next at-bat, FSN color analyst John Wehner reflected on Morton’s good stuff, and how perplexing it is that he has been hit so hard this year. Moments later , the camera cut to the Dodgers dugout, where Ethier was having a discussion with a coach. Did he give us a clue to the mystery? 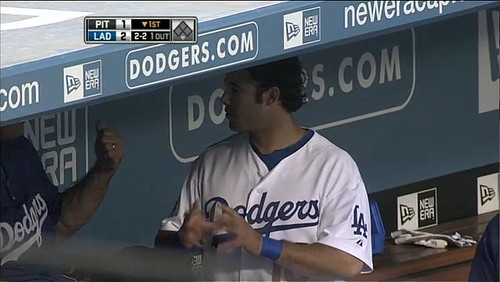 I immediately suspected that Morton was tipping his pitches, and that Ethier was explaining it to someone. For the rest of the game, I focused on Morton’s hands while he pitched from the stretch. Then I incorporated the DVR. Then, I went to the mlb.tv archive. The more I watched, the more convinced I became that Ethier had given us a hint.

First of all, take note of the grip that Morton uses before coming set. That is not his fastball grip. 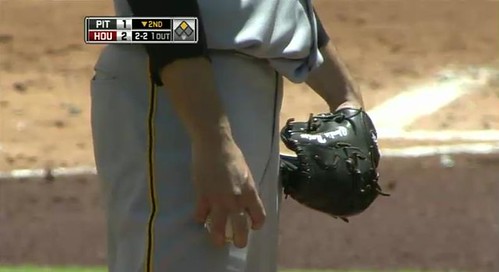 Next, watch this clip of Chris Young’s grand slam off Morton on April 9th in Arizona. Focus on Morton’s hands when he comes set. 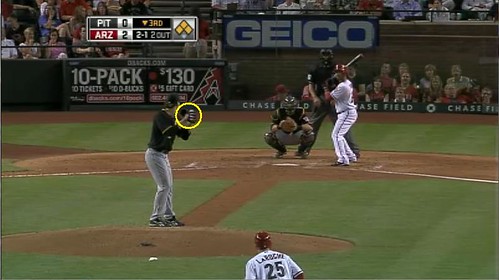 As he alters his grip in preparation to throw a fastball, Morton flips his glove a few times. Looking at this clip of James Loney’s home run on Friday (which came on a curveball), Morton does not do this on off-speed pitches. His glove remains very still.

Morton does not do this every time he throws a fastball. During some sequences of pitches, he does not do it all. In fact, he seemed to show little to no movement on Ethier’s home run that originally led me to watch closer. But as I studied video of Morton pitching from the stretch, I was able to accurately guess fastball or off-speed on probably 70% of his pitches. Sometimes he flipped his glove while holding it in place, as he did against Young in Arizona. Sometimes, his hands moved in some other manner as he adjusted his grip. More often than not , when he threw a fastball, there was some sort of hand movement. If the batters are making this same distinction from home plate, it would give them a huge advantage.

It is also possible that I am imagining all of this, because I am desperate to find a reason for Morton’s struggles. So if you are reading this and you expect to watch Morton’s next start, keep an eye on his hands. Try to guess which pitch is coming. See if you are correct. Am I crazy? Or am I on to something?

All screenshots courtesy of mlb.com