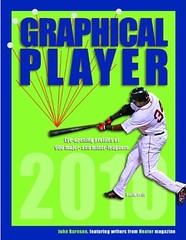 Each of the past two offseasons, I contributed to Graphical Player, a fantasy baseball annual put together by John Burnson of Heater Magazine. I write a little blurb on each player of significance on the Pirates roster, regarding their outlook for the upcoming season. Let’s take a look at a few of my Graphical Player 2010 player commentaries and see how I did.

Alvarez will probably start 2010 in Triple-A, but he will be in Pittsburgh by mid-season. He has struggled against left-handers and shown a high strikeout rate, but he has game-changing power that will promptly earn him a spot in the middle of the Pirates’ lineup. Expect a low BA and impressive power.

I was right on this one, as Alvarez finished with a .256 average, 16 home runs and a .205 Isolated Power (ISO). He also struck out in nearly a third of his plate appearances. That being said, I’m not sure I should receive much credit for predicting a lot of strikeouts and home runs out of Pedro.

Jones’ emphatic arrival in Pittsburgh will earn him a starting job in ‘10. But serious regression is coming, as three months does not eliminate the years of mediocre minor league performance. Expect a lower BA to drag down the rest of his stats. But his power is legitimate and will keep him in the lineup for now.

Again, I was mostly right about Jones, but I was not exactly going out on a limb. It turned out that his power was not all that impressive either, as his ISO ended up just a touch above league average.

Some bad luck on balls in play made LaRoche’s mediocre 2009 appear worse than it actually was. He finished the year strongly and still possesses the tools to be an above average major league hitter. Pedro Alvarez will likely arrive around mid-season, so LaRoche has just a few months to secure the 3B job.

Wrong. LaRoche was horrendous at the plate, and he essentially disappeared once Alvarez arrived from Triple-A.

McCutchen was much better than expected in his rookie season, particularly in the power department. There is always the risk of a sophomore slump (he only had 1 HR in September after 8 HR in August), but his skills are not fluky and he has adjusted before. Regard the listed forecast as a floor, not a ceiling.

I was saved by the editor on this one. My original prediction was a bit more optimistic about McCutchen, while the Graphical Player forecast mentioned saw him regressing in 2010. His numbers were pretty similar to 2009, with a slight drop in his power. Otherwise, his stats basically matched those from his rookie season in 2009.

Milledge’s alleged character issues never manifested in Pittsburgh, where he went .291/.333/.395 after being dealt by WAS. His batting average and defense advanced, but his walk rate and power regressed. Milledge is only 24, and he should mature into an above average player with solid double-digit HR.

You may notice a trend here. I am consistently overvaluing younger players, expecting them to show improvement simply by growing a year older. Milledge did not fall off the face of the earth like LaRoche did, but he did not show much progress in his age 25 season.

Walker has shown decent power in his minor league career, but he has struggled to maintain a .300+ OBP. He finished 2009 on a hot streak at Triple-A, earning a September call-up. Most likely, he will be back in Triple-A in 2010, but he could potentially make the major league roster in a utility role.

As you might expect, I undervalued Walker quite a bit entering the season. I had not quite given up on him yet, but I obviously was not expecting such an encouraging season.

Capps’ walk rate in 2009 was more than triple his 2008 level. He also underwent significant reversal in his H% and HR/FB. All these factors conspired to produce a pretty terrible season. We can’t know if he’s healthy, but 54 IP is not enough to sour on him. The Pirates plan to open 2010 with Capps at closer.

I was bitten by editing on this commentary, as my original text was worded a bit more optimistically. I expected Capps to bounce back in 2010, but not to the tune of a legitimate 2.47 ERA. You could make the case that it was the best season of his career.

Duke in 2009 made small improvements to nearly every aspect of his game. Those tweaks, along with an improved defense behind him, led to a more pleasing ERA and WHIP. Duke’s chances for further success rest on PIT’s ability to replenish their middle infield defense, which took a hit with their July dealings.

I cautioned that a poor middle infield defense could hurt Duke, but i’m not sure anyone was prepared for the true extent of the carnage. The overall defense was worse than I expected, Duke’s walk and home run rates were the worst of his career, and disaster ensued.

Hanrahan provides monster strikeout numbers, and if he could tame his wildness, he could become a shutdown closer. Unfortunately, he has been unable to corral his walk rate for any long stretch. Still, with his stuff, Hanrahan will definitely be in the mix in 2010 if Matt Capps continues to struggle as closer.

I guess I nailed this one, although Hanrahan blew a few saves once he settled into the closer role. Overall, though, he was plain nasty.

After arriving in a June trade, Morton had solid numbers with the Pirates (disregarding one disastrous start in which he allowed 10 runs in one inning). Morton needs to develop his command and consistency, but he has the pure stuff to be an impact starter. He could “turn some heads in 2010.”

Yeah, I kind of missed on this one, although Morton did “turn some heads in 2010.”

Overall, I feel like I did pretty well on these player summaries, with a few exceptions. Graphical Player 2011 is due to be released later in the offseason, so look forward to more great content.