For the past few months, I have been telling you about the 2011 Pirates Prospects Prospect Guide, which I have been working on non-stop since the end of the 2010 season.  The book is in the final stages, and expected to be completed soon, with a release date in the middle of January.  You can now pre-order the book to ensure that you will get one of the first copies when the book is released.

The book is jammed packed with reports and information on every prospect in the Pirates’ farm system, along with other useful information.  This information comes from people who have actually seen the players in action, as well as conversations we’ve had with the players, scouts, and other sources.  Features of the book include:

-Positional depth charts, All-Tools teams, and a recap of the 2010 season

-A listing of the top draft and international bonuses reported

-An early preview of the 2011 draft and Anthony Rendon

-Plus information on every prospect in the farm system

The book will be in a convenient 5.5″ x 8.5″ size, making it ideal for those of you who want information on players during Spring Training or minor league games during the 2011 season, without having to carry a large book around.  The book also provides a quick reference for any conversation you might be having on the Pirates, whether you’re looking for player stats, how a player was acquired, Rule 5 or Minor League Free Agency information, top signing bonuses, and much more.

–Spring Training Coverage. I would like to provide coverage from Spring Training, without the need for charging for the coverage, or providing special premium reports only to subscribers.

–Pitch Velocity. How would you like to know what every pitcher in the farm system throws?  How about their velocity, both when the ball is leaving their hand, and when it crosses the plate?  One of the primary investments I plan on making is a professional radar gun, which will provide these reports on every pitcher I get to see.

–More Games. At the end of the 2010 season, I went on a minor league tour, covering over a dozen games from three affiliates in five different cities over the span of two weeks.  I would like to do a lot more of that, but since those trips are paid for out of my own pocket, the opportunities are limited.  If you enjoyed the coverage at the end of the 2010 season, and would like to see similar coverage throughout the 2011 season, then your purchase of a Prospect Guide will help provide that information.

–More Interviews. It’s simple.  The more games I go to, the more interviews I can get for the site, and the more you can learn about the players in the farm system.

–High Quality Photos. Another investment I plan on making is a much better camera, which will provide a lot of high quality photos of the Pirates prospects during my coverage.

I don’t charge for the site, and I don’t want to charge for the site.  I like that the site is free, and that so many people have enjoyed it over the last two years.  In that time I’ve provided game reports, interviewed prospects, gave you a view of those prospects with the video recaps, and spent countless hours keeping the site fresh with content, keeping you up to date with what is happening with the Pirates, all while breaking the occasional story before anyone else hears about it.

I want to keep the site free, but I also want to provide more content for the site.  By purchasing the book, you’re essentially making a donation to the site, so that I can provide expanded coverage of the farm system in 2011 and beyond.  With that purchase, you’re not only getting expanded coverage of the farm system, but you’re also getting a great product, which I have designed with the intentions of providing you much more value than the $20 you paid for it.  In short, the successful sale of this book will provide you with free access to a full time reporter on the Pirates’ minor league system, not to mention a great reference to every aspect of that minor league system.

You can place your pre-orders for the 2011 Pirates Prospects Prospect Guide below.  At some point in the middle of January (depending on how soon the books can be printed and shipped out), I will be sending out the first shipments.  Pre-ordering will guarantee that you get your guide first, with no delays, and most importantly, prior to the start of Spring Training.

My sincere thanks go out to everyone who places an order, and I can’t wait to start providing you coverage for the 2011 season. 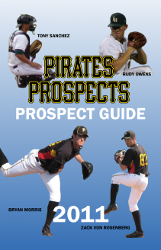 Does the defense cancel out the putrid offense?

Does the offense cancel out the defense? Two ways to look at it.

If they can get another big bat they can “hide” Barmes in the 8 hole. He’s very good defensively and it seems to me that he’s been hitting more lately.

Barmes is the veteran SS the team needs going down the wire. Getting Scutaro or Drew makes the bench much stronger and at this time the bench and right field are the biggest problems the Pirates have. Sutton should be on that bench, the fact that he is playing as much as he is shows the glaring weakness for another outfielder and if in the judgement of Huntington Marte is not ready, a trade will certainly have to happen. You can’t win without defense, If Barmes is removed the pitching staff will have 2 holes to worry about instead of one. Their playing with 7 fielders now, just think what it would be like to play with 6? Unfortunately we only keep stats on hits winning games, we don’t keep track of how many times a brilliant defensive play saves a game. If we did we might find out Barmes has more wins than we think.

Actually, if the other 7 bats in the lineup keep hitting, I can live with Barmes at SS

I’d still like to see Mercer given a chance to start everyday, but obviously Clint doesn’t like him. If you’re not gonna play him, bring up d’Arnaud….at least he can pinch run.

True. Having a guy who never plays makes zero sense.