Catching up with Ryan Beckman

Back on February 27th during a spring training game the Pirates surprised some people bringing Ryan Beckman into a major league game. Prior to this season he had spent just two years in short-season ball so he was pretty far down on the list of pitchers that you would expect to see. Just two days into spring games and with a full camp roster of guys on the 40 man roster and a ton of non-roster invitees it took an injury and a pitcher reaching his pitch count too soon to get him into the game and he retired all five batters he faced. Following the game we interviewed Ryan which can be read here. 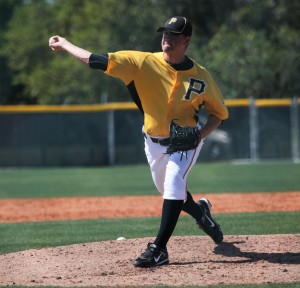 Since this season started Ryan has been moved to the closing role full time after getting just three saves his first two seasons. He has also moved up to Bradenton and performed well, pitching four innings over two appearances without allowing a hit or walk and striking out four. Before moving up he threw six scoreless innings at West Virginia and all told he has recorded four saves already. He throws his fastball in the low 90’s while also mixing in a curve and a change-up and he is pitching from a different arm angle from his recent past.

The Pirates in recent years didn’t always rely on a closer prospect to pitch in save situations. Guys like Noah Krol, who is about to turn 27, and Jean Machi who is no longer in the organization have been getting save opportunities. So it’s nice to see a young pitcher, drafted slightly high (18th round) put in the hard work in the off-season and be given the chance to pitch and succeed in pressure situations

I had a chance to catch up with the 21 year old right handed pitcher following yesterday’s game and ask a couple quick follow up questions.

John: Ryan, do you think your experience and success in Spring Training with the major league team helped your confidence so far this season?

Ryan: Absolutely, anytime you get to be around big leaguers you try to learn their ways and see how they carry themselves, after all we’re all trying to get to where they are and they all have confidence and know they have talent.

John: Were you surprised at the quick move to Bradenton and the fact you’re closing for them too?

Ryan: Yes a little. You just go out and try to control what you can, I have no say in where I go, just how well I pitch, so that’s all I focus on. I just try to pitch off my fastball and go in the game when I get the call.

I was intrigued by the move of Ryan already because usually teams won’t move players up a level this quick. Also in Bradenton when they need a short term pitcher (or position player) they usually go across the street to Pirates City and take someone out of extended spring training who otherwise wouldn’t be pitching in a regular game until one of the short-season teams starts playing in June. Fraylin Campos was an example of that this season although he was there such a short time he didn’t even get into a game. The way Ryan has pitched this season it would be tough to return him to West Virginia at this point. So far, he has been one of the more pleasant surprises of the season.

On another note, LHP Porfirio Lopez has made an even bigger jump than Beckman did. He was in the Dominican Summer League last year for the third season. He was likely headed to a start in the GCL this season but he has actually spent two weeks now at Bradenton making five appearances. It can’t be due to a lack of pitchers in extended spring training, the Pirates have plenty of arms there so it’s interesting that he remains with the team this long.