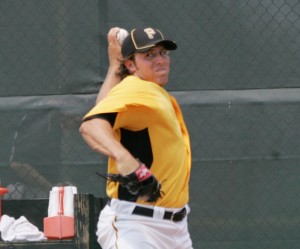 Notes: Jared Hughes (0-1, 3.60) got the start tonight, allowing two runs, one earned, on five hits in five innings.  Tim Alderson (3.38) followed him up, allowing two runs in two innings.  They were the first two earned runs of the season for Alderson, who had 3.1 innings without an earned run coming in to tonight.  Brian Leach (4.15) threw two innings, allowing one run on no hits and two walks, with one strikeout.  His run came thanks to two wild pitches.  Leach has struggled with his control this year, with six walks in 4.1 innings.

Notes: Brett Lorin (0-1, 6.43) made his second start at the high-A level, allowing five runs on eight hits in four innings.  Jason Erickson (6.43) didn’t do much better, allowing four runs on seven hits in four innings.  Porfirio Lopez (2.25) pitched a perfect inning, striking out two.  Lopez allowed one run in three innings in his first appearance three days ago, and came back with a strong follow up.  The left hander was throwing in the 88-91 MPH range, touching 92, when I saw him in Spring Training.

Notes: Zack Dodson (1-1, 2.00) made his second start of the season, allowing four runs, two earned, on three hits, in four innings.  He walked two and struck out three.  That follows up five shutout innings, where Dodson walked one.  His biggest issue last year was control issues, so his three walks in nine innings looks good this year.  He did have two wild pitches tonight.  Brooks Pounders (1.80) pitched three innings, allowing one unearned run on two hits, with no walks and four strikeouts.  Ryan Beckman (0.00) pitched a perfect inning, his second shutout inning in as many nights.  Beckman has six shutout innings this year, allowing three hits.