Exploring the Arsenal: A Preview of the Atlanta Braves’ Probable Starting Pitchers 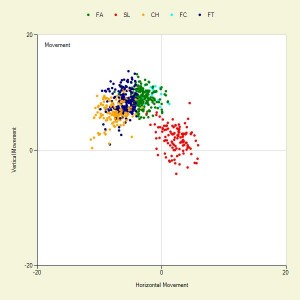 Jurrjens’ velocity is down a tick this year, averaging around 90 MPH. It appears that he throws both a four-seam and two-seam fastball, and also an occasional cutter. However, it is not clear that these are actually separate pitches, as there are only slight variations in the movement and velocity of each. Jurrjens also throws a changeup in the low 80’s and a slider that sits around 80 MPH. He is missing fewer bats so far this year, but he has also cut down his walk rate significantly. 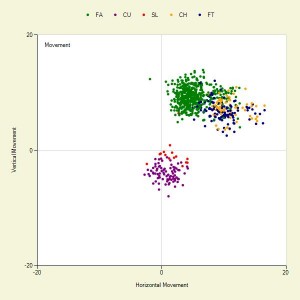 Minor will make his second start of the season Wednesday, filling in for the injured Tim Hudson. He allowed 5 runs in 4.1 innings on April 6th in Milwaukee, after making eight starts for the Braves in 2010. The polished southpaw throws a four-seam fastball in the low 90’s, a plus changeup in the low 80’s and a slurvy breaking ball in the upper 70’s. In his brief time in the majors, Minor has shown a willingness to work inside with the fastball to right-handed batters. However, he has not done the same with lefties, mostly staying on the outer half. He has had success missing bats at this level, with a whiff rate approaching 22% in his career. He induces a large number of swings-and-misses with his change, although his other pitches have proven difficult to put in play as well.