Exploring the Arsenal: A Preview of the Milwaukee Brewers’ Probable Starting Pitchers 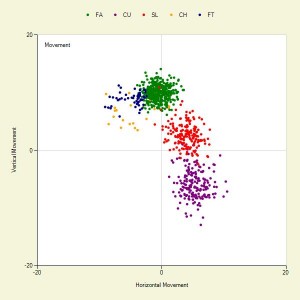 Gallardo’s low 90’s fastball is fairly straight, with occasional cutting action. The right-hander mixes in a slider and a hard curve, utilizing each pitch at similar frequencies. He also throws a changeup, which he uses very sparingly. Gallardo has struggled to miss bats with his fastball this year, generally relying on his curve and other secondary pitches to generate swings-and-misses. This has led to a significant drop in his strikeout rate compared to previous seasons, a major contributor to his 2011 struggles. 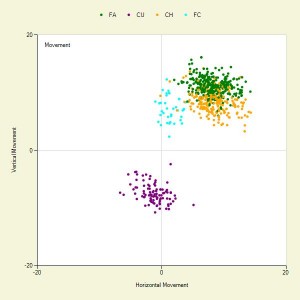 Narveson is a soft-tossing southpaw, with a fastball that sits around 88 MPH and touches 90 on occasion. He has heavily increased the use of his changeup over the past couple years, throwing it 32.7% of the time in 2011. His change, which comes in around 80 MPH, generally shows similar movement to his fastball. He also throws a slow curve and mixes in a mid-80’s cutter. Despite the unimpressive velocity, Narveson misses a lot of bats, particularly with his changeup. He is striking out almost a batter per inning this season, and has probably pitched better than his 4.38 ERA would indicate. 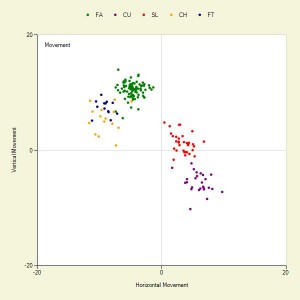 Greinke has only made two starts so far this year, after missing the first month with a rib injury. He has produced an impressive 15 strikeouts and one walk over ten innings. He throws a sinker in the low 90’s, and can run his four-seamer up over 95 MPH at times. Greinke also throws a slider in the mid-80’s, a curve in the mid-70’s and a change in the low-80’s. The slider has long been his out pitch, with a whiff rate that sits well above average.