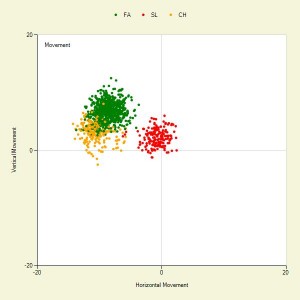 Hudson keeps things pretty simple on the mound. He throws from a low three-quarters arm slot, and slings the ball up to the plate. He pounds the zone with a low 90’s fastball that can touch 95. He also mixes in a changeup in the low 80’s and a slider in the mid 80’s. The change is a plus pitch, with sharp movement and and elite whiff rate. The fastball and slider are impressive as well, missing bats at an above average rate. 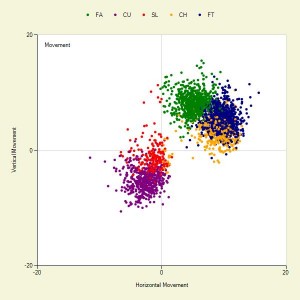 Obviously, Pirates fans are familiar with what Duke brings to the table. He throws a very hittable fastball, surviving on solid secondary stuff and a diverse arsenal. Both his four-seam and two-seam fastballs sit in the upper 80’s, with decent arm-side tail on the two-seamer. He throws his changeup in the low 80’s with some sinking action. Duke also throws a slider around 80 MPH and a curve in the low to mid 70’s. Both pitches generate a whiff rate right around league average. 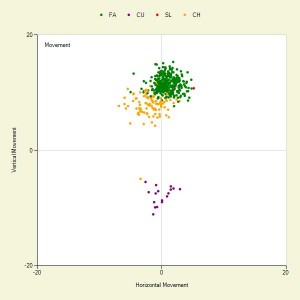 Collmenter throws from an exaggerated straight overhand arm slot, leaning back awkwardly at the release point. As a result, the 6’4″ right-hander generates little horizontal movement on his pitches, throwing each of his different offerings on a downward plane that matches his unusual delivery. He does not throw very hard, as his fastball sits in the mid to upper 80’s. Nevertheless, Collementer has thrown the heater over 70% of the time this season. He also throws a changeup in the mid 70’s, with some slight tailing action. He also occasionally mixes in a big, slow curve with 12-6 break. He does not miss many bats, relying more on strong command.