Exploring the Arsenal: A Preview of the Toronto Blue Jays Probable Starting Pitchers 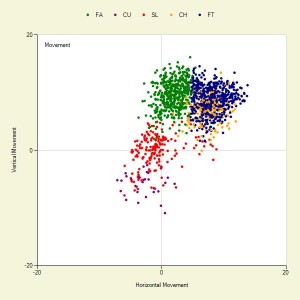 Reyes throws with an effortless overhand delivery. He pitches to contact with his two-seam fastball, and uses his four-seamer to miss bats. Overall, over 70% of his 2011 pitches have been fastballs. Both pitches sit right around 90 MPH, and his four-seamer flashes a bit of cutting action. His low 80’s slider is his strikeout pitch, generating an above average whiff rate. He also throws a change in the low 80’s and very rarely mixes in a mid-70’s curveball. 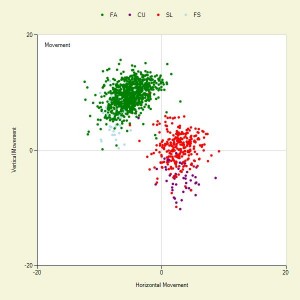 Morrow is another guy who serves up a large number of fastballs, just a touch under 70% of his pitches in 2011. He throws from a three-quarters arm slot, and features above average velocity. His fastball generally sits in the 92-94 range, and can touch 97 MPH. He generates plenty of swings-and-misses with the heater, but his mid to upper 80’s slider is his big strikeout pitch. He has used the fastball/slider combination almost exclusively this year, greatly reducing his reliance on the rest of his repertoire. He has occasionally mixed in a curve and splitter this year, and has also thrown a changeup in the past. Morrow often works up in the zone. That probably contributes to his impressive strikeout rate, but it has also led to a ton of line drives and fly balls. He has kept most of those flies in the park so far, but his bloated line drive rate has led to plenty of baserunners and a higher ERA than you might expect based on his strikeout numbers. 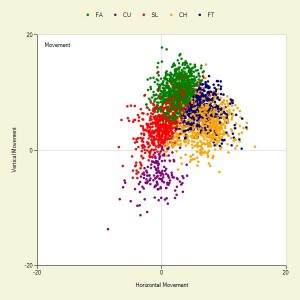 Cecil was just recalled from Triple-A, and will be making his first major league start since April. His four-seam fastball sits around 90 MPH, occasionally approaching the mid 90’s. His two-seamer comes in just a pinch slower, and shows decent sinking action. He leans heavily on his effective low 80’s changeup, which also has good dropping movement. Cecil mixes in a mid 80’s slider and occasionally an upper 70’s curve. Most of his pitches are pretty hittable, with his changeup being the notable exception.