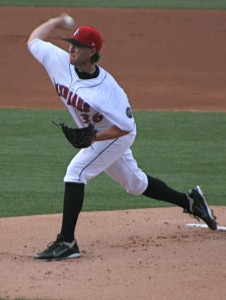 The Indianapolis Indians out-hit the Charlotte Knights 8-7 this afternoon at Knight Stadium in the Charlotte suburbs, but the Knights used their hits to better advantage, earning their second win in this 4-game series.  Sean Gallagher (photo) suffered the loss, his 5th of the season for the Tribe, pitching into the 7th inning.  He was responsible for all of Charlotte’s runs.

Gallagher cruised through the first two innings, allowing just one hit, a double to the Knight’s lead-off batter,  LF Tyler Kuhn, was making his AAA debut.  The Indians posted 2 hits over the first two innings, a single to LF John Bowker in the 1st and a double to 1B Matt Hague in the 2nd.  Hague’s double was lifted into left field, and when he tried to stretch it into a triple, Kuhn threw a bullet to third base, where Hague was tagged out.

The Tribe scored the first run of the game in the top of the 3rd.  SS Pedro Ciriaco started the brief rally with a line drive for a double.  3B Josh Harrison lined a single into center field, and Ciriaco raced around from second base to score what would become the Tribe’s only run.  Harrison stole second base, and he also motored around from second on a single by Bowker.  But Kuhn came to the Knight’s rescue again, with another amazing throw in from left field.  Harrison was out at the plate.  The inning ended when Knights’ starter Matt Zaleski (a former Indiana State University pitcher) picked Bowker off first base.

That one-run lead did not last long.  The Knights came right back in the bottom of the 3rd to take the lead. SS Andrew Garcia led off with a double into center field.  Gallagher’s wild pitch put Garcie on third base, and the tying run scored on a single into right field by 1B Kyle Shelton.  Kuhn doubled for the second time in the game, moving Shelton to third base, and the Knights had two runners in scoring position with no outs.  2B Eduardo Escobar’s sacrifice fly plated Shelton.  A fly out gave Gallagher two outs, but DH Dallas McPherson drove in Kuhn with a single before a ground out ended the inning.  The Knights had taken a 3-1 lead.

Gallagher went on to retire the side in order in the next two innings.  He got two ground outs to begin the 6th, then surrendered a solo home run to CF Jordan Danks, boosting Charlotte’s lead to 4-1.  Gallagher gave up a double to former Indy Indian 3B Gookie Dawkins to begin the 7th.  He got two outs with a strikeout and a line out, then was relieved by Steven Jackson.  Jackson finished the 7th with a fly out, then retired the Knights with three straight ground outs.

Like last night, the Indians had trouble finding their bats for several innings.  Eleven Tribe batters went down in order from the 4th through the 7th innings.  C Jason Jaramillo doubled with two outs in the 7th, but he was left on base.  The Indians threatened in the 8th, when CF Gorkys Hernandez and Ciriaco hit back-to-back singles in the 8th, but a fly out and a strikeout ended the threat.  C Ryan Doumit, who again played the entire game instead of just 7 innings, was hit by a pitch in the 9th, but he was forced out at second base on a grounder to end the game.

Indians’ Defensive Gem of the Game:  Nice catch of a line drive off the bat of Kyle Shelton by Pedro Ciriaco in the 7th, keeping Gookie Dawkins from advancing from second base and maybe scoring.

Pitcher Chris Leroux was recalled to the Pirates today.  He will take the roster spot vacated by Chase d’Arnaud, who was placed on the DL due to his finger fracture.