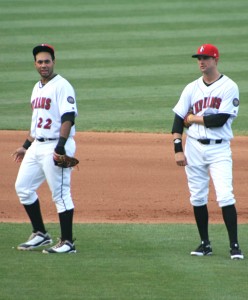 Pedro Alvarez’s fans will be excited to hear that their hero blasted a 2-run homer this evening and also contributed a sharply-hit RBI single, driving in 3 of the Indianapolis Indians’ 5 runs.  Alvarez (photo with Jordy Mercer) also scorched a line drive that ought to have been a double into left field, but he was robbed by a stellar catch by Rochester’s 3B Chase Lambin.  Unfortunately, those RBI were not enough for the Indians to get past the Rochester Red Wings, who came up with 12 runs on 17 hits to earn the win at Victory Field tonight.

Indians’ starter Sean Gallagher made the start tonight and pitched 3.2 innings, the same length as his last outing on Monday, when he relieved starter Brian Burres.  On Monday, Gallagher allowed one run on one hit and 4 walks.  But tonight he ran into much more trouble, surrendering 5 runs on 9 hits with 3 walks. 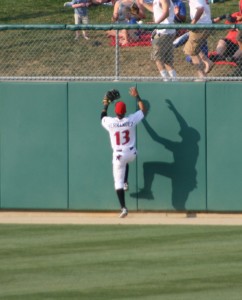 The Red Wings scored their first two runs in the top of the 1st.  Gallagher began the game by striking out rehabbing CF Denard Span.  DH Brandon Roberts singled, and after a second strikeout, 1B Jeff Bailey hit a long fly ball to center field.  CF Gorkys Hernandez tried to run up the wall to get it (photo), but he’s just not tall enough, and Bailey had a 2-run homer.

The second inning began with a walk to Lambin, but he was erased when 2B Toby Gardenhire bounced to 2B Josh Harrison, who started a 4-6-3 (Harrison to SS Jordy Mercer to 1B Matt Hague) double play.  Just when it looked like Gallagher might be able to zip through the inning, the next four Red Wings reached base safely — a solo home run by C Rene Rivera, an infield single deep into the hole at short by Span, and RBI double by Roberts, and a walk to RF Rene Tosoni.  A force out at second ended the inning, and the Wings had a 4-0 lead. 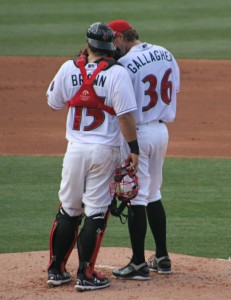 Two very nice plays by his fielders let Gallagher (photo, with Dusty Brown) get through the third inning without a run scoring.  RF Miles Durham made a leaping catch at the wall in right to rob his counterpart RF Brian Dinkelman of an extra-base hit.  SS Matt Tolbert singled, but Lambin sliced a low line drive right to Tribe 1B Hague, who made the catch at his knees right in front of first base.  All Hague had to do was take one step backwards onto the bag to double off Tolbert and end the inning.

That was Gallagher’s only “easy” inning.  Gardenhire led off the top of the 4th with a single, and he moved to second base on a wild pitch.  He scored on Span’s second hit of the game, a line drive into right-center field.  A single by Roberts and a walk to Tosoni loaded the bases with one out.  Gallagher got a big out when Bailey popped out to short.  Gallagher’s night ended there, though.  He had thrown 74 pitches (44 strikes), and left the game trailing 5-0.  Chris Leroux, just arrived after being optioned down from Pittsburgh, came on in relief and threw one pitch — which is all it took to get Dinkelman to fly out to center to end the inning. 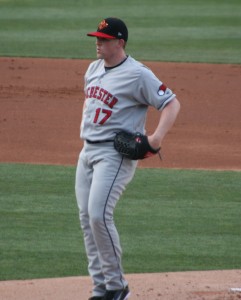 The Indians’ batters got going in the middle innings of the game.  Former Pirate and Indian Eric Hacker (photo) made the start for Rochester — his first trip back to Victory Field since he played in the Pirates’ organization in 2009.  Hacker retired the first 6 Indians he faced.  DH Andy Marte and Durham hit back-to-back singles to begin the 3rd inning, but a strikeout and a timely double play kept the Tribe scoreless.

Alvarez put the Indians onto the scoreboard in the 4th.  Josh Harrison led off by beating out the throw on a perfect little bunt along the third base line.  Harrison stole second base, his 10th of the season.  After two outs, Alvarez’s RBI single lined into right field let Harrison race around from second to score the Indians’ first run, for a 5-1 score.

The Red Wings got the run back in the top of the 5th.  With Leroux back on the mound and two outs, Gardenhire walked and stole second base, then scored on Rivera’s second hit of the game, a grounder through the hole into left field for an RBI single. Red Wings up, 6-1.

The Indians began the bottom of the 5th with another pair of back-to-back singles.  This time it was Marte taking a line drive into left field and Durham smacking a grounder down the left field line and into the corner for a double, moving Marte to third base.  Hernandez’ RBI ground out brought in Marte.  Then Mercer added another double down the left field line, plating Durham, to nudge the Indians closer, 6-3.

Hacker came out to begin the bottom of the 6th, and for the fourth straight inning, the Indians had their lead-off batter reach base.  Hague was hit on the shoulder by Hacker’s first pitch of the inning.  That brought up Alvarez, who crushed a no-doubter home run all the way to the video scoreboard behind the berm beyond the right field wall.  The Indians had come within two runs of the Red Wings, 6-4, and they had chased Hacker to the showers.  Dusty Hughes came on to pitch for the Wings, and he ended the 6th by striking out three Tribe batters in a row. 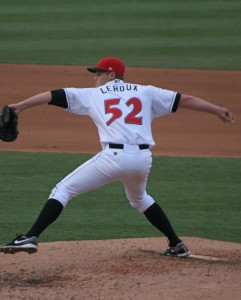 That was all the scoring the Indians would manage, though.  Dusty Hughes gave up a single to Hernandez to begin the 7th (five innings in a row with the lead-off runner reaching), but he retired the next three batters.  Red Wings’ reliever Jake Stevens pitched the final two innings and retired 6 Indians in order.

Chris Leroux (photo) retired the Red Wings in order in the 6th, including two strikeouts.  Jared Hughes also put the Wings down in order in the 7th, and in that inning, both teams had a Hughes pitching for them.  Jared Hughes came back out to start the top of the 8th.  He got one out, then gave up a double to Rivera (his third hit of the game, leaving him just a triple away from the cycle).  Hughes was relieved by Justin Thomas, who had a very un-Thomas-like inning.

Thomas was greeted by Denard Span’s third hit of the game — a 2-run home run.  Then he gave up hits to the next four batters:  a single by Robers, a double by Tosoni, an RBI double off the left field scoreboard by Bailey, and an RBI single by Dinkelman.  Tolbert brought in the fifth run of the inning with a sacrifice fly.  A ground out finally ended the inning, but Rochester had batted around and plated 5 runs, for an 11-5 lead.

Tim Wood pitched the 9th inning, and he gave up the final Red Wings’ run, on a solo home run by Rivera, who admitted after the game that a second home run was probably better than hitting for the cycle.

Indians’ Hitting Gem of the Game:  Pedro Alvarez’s 3rd home run with the Indians’ this season, the 2-run shot that got the Indians as close to the Red Wings as they would get.

Indians’ Defensive Gems of the Game:  Two plays in the 3rd inning.  Miles Durham made a leaping catch at the right field wall of a ball hit by Brian Dinkleman for the first out of the inning.  Then moments later, Matt Hague made a very slick-looking catch of a low line drive by Chase Lambin, and needed only one step to double Matt Tolbert off first base. 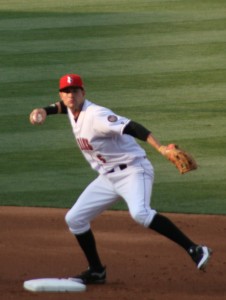 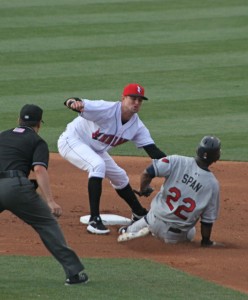 Rehabbing Denard Span steals second base.  The throw from C Dusty Brown skipped off Jordy Mercer’s glove and trickled over toward right field. 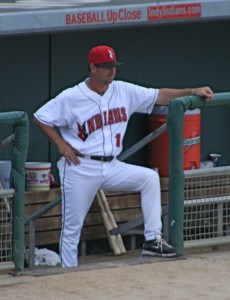 (Thanks for autographing the jersey!)