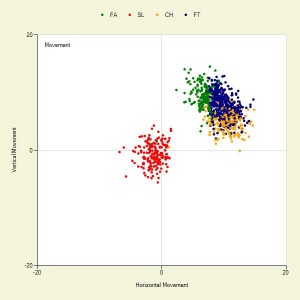 Gorzelanny steps toward first during his delivery, throwing across his body from a low three-quarters release point. His four-seam fastball sits right around 90 MPH, and misses plenty of bats. His two-seamer is a tick slower, with decent arm-side movement. He also throws a sweeping slider that comes in at 80 MPH, and generates plenty of swings-and-misses, as well as a low 80’s changeup. Gorzelanny has had a tendency to struggle with his command in the past, but it seems as if he has made some improvements in that area since leaving the Pirates. 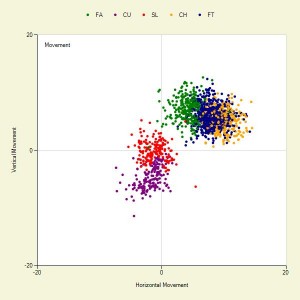 Lannan is a command guy who only occasionally ramps his high 80’s fastball over 90 MPH, although he has seen a slight bump in velocity in his past several starts. He does not miss many bats, particularly with his fastball, and he usually strikes out right around 12% of opposing hitters. He mixes up his pitches to keep hitters off balance, and consistently generates a groundball rate over 50%. Lannan does not get much velocity separation between his fastball and his changeup, which usually sits in the 83-85 MPH range. He also throws a curve in the mid 70’s and a slider in the low 80’s. 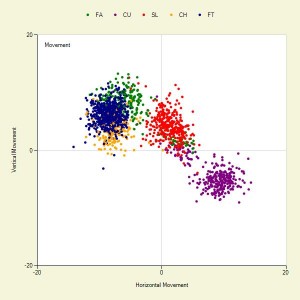 Hernandez is the prototypical junk ball pitcher. His fastball sits anywhere in the 80-86 MPH range, usually averaging around 83 MPH. He throws a “hard” slider around 80 MPH, and a slow curve in the upper 60’s. Occasionally, he will throw an eephus-like curveball that drops below 60 MPH. He also throws a changeup in the upper 70’s. Hernandez lives on excellent command. Against right-handed batters, he pounds the outside corner with his fastball, curve and slider. Against lefties, he does the same with the fastball and changeup. Occasionally, he will try to jam left-handers with a fastball on the inner half. No matter who is at the plate, Hernandez very rarely throws a pitch in the middle of the plate, which is why he is effective with so little velocity. He misses some bats with his curve, but the rest of his pitches are very hittable. 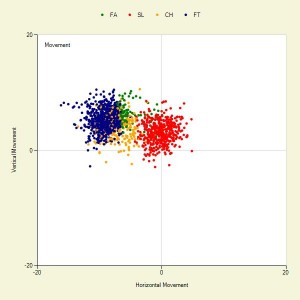 Marquis is consistently among the top groundball pitchers in baseball. He tends to sling the ball toward the plate with a jerky release, which helps generate the sharp movement on his pitches. His two-seam fastball sits a bit under 90 MPH, with good sinking action. He also throws a slider in the mid 80’s and a change in the low 80’s. He is similar to Charlie Morton, in that he generally locates his sinker in on righties and away from lefties. This may be one of the reasons he has had greater success against right-handed batters than against lefties. Marquis does not miss many bats, relying mostly on the groundballs to have success.