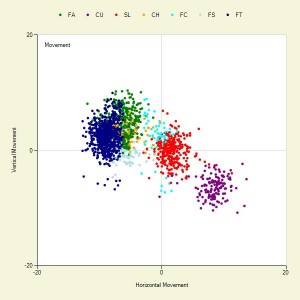 Hudson is a ground ball specialist, mainly due to his sinking 90 MPH two-seam fastball. He goes to the sinker on nearly half of his pitches, and uses a wide array of other pitches the remainder of the time. He generally works on the outer half of the plate, using his slider and an occasional cutter to bust left-handers inside and sometimes working in on right-handers with the two-seamer. Hudson mostly sticks with the four-seam fastball, sinker/two-seamer and slider. He also mixes in a low 80’s change, a mid 70’s curve, a mid 80’s splitter and the upper 80’s cutter. He does not have a big-time strikeout pitch, but almost all of his offerings have at least an average whiff rate or above. 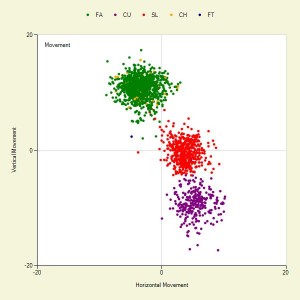 Hanson makes heavy use of his low 90’s fastball and low 80’s slider, going to one of the two pitches on about 80% of his offerings. He mostly works the outer half of the plate with the two pitches, and is especially good at painting the outside corner with backdoor sliders against left-handed batters. He also throws a big-breaking 12 to 6 curve in the mid 70’s. Hanson gets the majority of his swings-and-misses with the curveball, although his fastball and slider also maintain slightly above average whiff rates. The 24-year-old has taken a step forward this year, and only Clayton Kershaw has a higher strikeout rate among qualified starting pitchers.

Look for Part 2 on Wednesday afternoon.