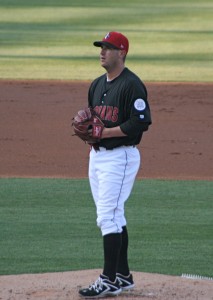 3B Josh Harrison closed out the Indians’ home stand tonight with a walk-off single in the bottom of the 12th inning to give Indianapolis the win over Rochester at Victory Field.  This was the third extra-inning game the Indians played in this 8-game home stand.  The Tribe won two of those extra-inning contests, and went 6-2 over these 8 games.  They won both 4-game series 3 games to won, the first against Charlotte, and then this series with the Red Wings.  It also means that the Indians won the season series with Rochester 5 games to 3.

Brad Lincoln (photo) made the start for the Indians, and though he did not figure into the decision, Lincoln pitched well.  He went 7 innings and allowed 3 runs on 3 hits and 2 walks, with 5 strikeouts.  He threw 98 pitches, with 63 strikes.  It’s not unusual for Lincoln to pitch very well for all but one inning of his outing, but get into trouble in just that one inning.  That’s what happened to him tonight too.  After retiring the first 6 batters in order, Lincoln began the top of the 3rd by allowing the first three batters of the inning to reach base.  3B Chase Lambin slipped a single into right field, and DH Aaron Bates worked a walk.  C Rene Rivera, who went 4-for-5 in the Red Wings’ win on Saturday, continued his hot hitting with a 2-RBI double off 3B Harrison’s glove and down the left field line.  A ground out moved Rivera to third base, and he scored on 2B Luke Hughes’ sacrifice fly.  The Red Wings had a 3-0 lead.

Lincoln gave up a single to 1B Jeff Bailey to lead off the 4th inning, but erased him in a double play.  RF Rene Tosoni walked, but was left on base when Lambin flied out to end that inning.  Lincoln mowed down the Wings over the next three innings, giving him 10 outs in a row to finish his evening’s work. 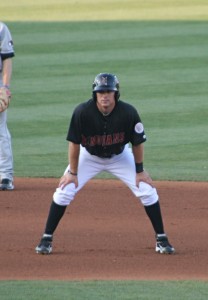 With Kevin Slowey on the mound for the Red Wings, the Indians managed to put runners on base in all but one of the first 8 innings.  The Tribe batters had two hits in both the 2nd and 4th innings (1B Matt Hague and Harrison in the 2nd, LF John Bowker (photo) and DH Andy Marte in the 4th), but both times left both runners on, including runners in scoring position.  They finally pushed a run across the plate in the 5th.  RF Miles Durham led off the inning by dropping down a bunt that trickled along the third base line.  Three Red Wings’ infielders’ stood over the ball as it rolled, waiting for it to dribble over the foul line — but it finally came to rest touching the line, about two-thirds of the way to the third base bag, and Durham had an infield single.  Two outs later, Durham stole second base, then was off and running with the swing of 2B Jordy Mercer’s bat, scoring on Mercer’s liner into the left-center field gap.

A grounder to first ended the 5th inning, but the Tribe came right back at it in the 6th.  Hague led off with a looping single into short left field for his second hit of the game.  Marte also picked up his second hit of the game, and the first Indians’ extra-base hit with a double down the third base line, past the diving 3B Lambin, on down the left field line and into the Tribe bullpen.  Hague sped around from first and slid across the left side of the plate as the throw in from left field arrived at about the same time, but a few feet in front of the plate, and the swipe attempt to tag Hague missed.  C Dusty Brown lined a single into left field, advancing Marte to third.  That set up Marte to score when Durham lifted a sacrifice fly to center field tying the score at 3-3. 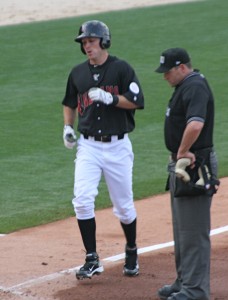 The Indians took the lead in the 7th.  With two outs, John Bowker crushed a towering fly ball just inside the right field foul pole for a solo home run, giving the Tribe a 4-3 lead.  Hague followed the homer with a grounder to third, which caromed off 3B Lamkin’s glove and into foul territory.  Lamkin seemed stunned and it took him a moment to recover and chase after the ball, giving Hague time to reach second base on the error.  Marte lined a single into right-center field for his third hit of the game, plating Hague with an insurance run.  Indians up, 5-3.

Steven Jackson began the top of the 8th on the mound in relief of Lincoln.  He was greeted by a solo home run by Bates, who took a 1-0 pitch just barely over the right field wall, to bring the Red Wings within one run, 5-4.

The Wings tied the game in the top of the 9th.  Justin Thomas began the inning on the mound for the Tribe.  He gave up a line drive single to CF Dustin Martin, just out of the reach of the leaping Mercer, to open the inning.  A walk moved Martin to second base and a wild pitch put Martin on third base with no outs.  LF Brian Dinkelman drove in Martin with an RBI grounder, tying the score at 5-5.  Thomas struck out the next batter, then was relieved by Jared Hughes, who ended the inning with another strikeout.

The Tribe went down in order in the bottom of the 9th.  Hughes got himself into and out of trouble in the top of the 10th.  He gave up a single to Bates, then erased him with an odd double play.  With Bates on first, Rivera grounded to the right side of the infield, not quite half way from first to second.  The ball passed in front of Bates, who stopped in his tracks as the ball zipped past him.  Mercer fielded the ball and tossed to first base, where Hague made the force out on Rivera.  Bates had again started toward second base, but he was way behind.  Hague fired the ball to Ciriaco, covering second base, and Bates turned around and headed back toward first base.  Ciriaco threw back to Hague, who finally tagged out Bates to complete the double play.  The next two batters, Tolbert and Luke Hughes both singled, but Jared Hughes was not impressed, and he got Martin to tap back to the mound to end the inning.

Jared Hughes came back out to start the top of the 12th.  Lambin led off with a single through the left side of the infield, and he was bunted over to second base.  Rivera second hit of the game gave him his third RBI, when he singled on another grounder into left, bringing in Lambin from second base.  The Red Wings had a 6-5 lead.  After a walk, Jared Hughes was relieved by Chris Leroux, who ended the inning with a strikeout and a ground out.

The Indians had one more chance in the bottom of the 12th, and they began with the top of the order.  Ciriaco started a rally with a walk, and advanced to second base when Mercer put down a nice sacrifice bunt.  John Bowker was a hero again, when he lined an RBI single into left field, allowing the speedy Ciriaco to race around from second to tie the game.  Hague grounded out for the second out of the inning, which moved Bowker over to third base.  Pinch-hitter Jason Jaramillo was intentionally walked.  That brought up Josh Harrison, with runners on first and third with two outs.  Harrison smacked a line drive back up the middle, scoring Bowker easily from third to give the Indians the walk-off win.

The Indians will head out on a road trip beginning on Tuesday.  They will play 4 games against the Knights in Charlotte, then 4 against the Gwinnett Braves.

Indians’ Hitting Gem of the Game:  Josh Harrison’s clutch RBI single in the 12th, giving the Tribe the win.  Also of note:  John Bowker went 3-for-6 with a solo homer and a key RBI in the 12th.  Andy Marte wnet 3-for-4 with a double and 2 RBI.

Indians’ Defensive Gem of the Game:  In the top of the 8th, Rene Rivera slapped a line drive toward the gap in left-center — but Pedro Ciriaco had other ideas.  He went to his left and made a spectacular horizontal dive to make the catch and rob Rivera of the hit.

The left field scoreboard seemed to be cheering John Bowker on for this fly ball: 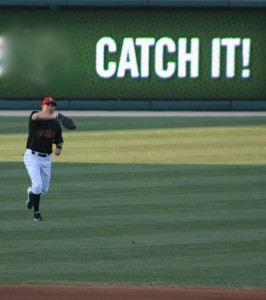