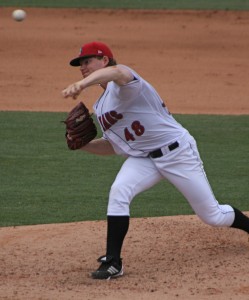 Rudy Owens (photo) made his second 7-inning start in a row, and today’s was even better than Tuesday’s.  Owens pitched 7 scoreless innings this afternoon at Victory Field, as the Indians shut out the Rochester Red Wings.

Owens had to work out of a jam in the top of the 1st.  Rehabbing Rochester CF Denard Span began the game with what should have been an easy grounder to the right side of the infield.  But Tribe 2B Josh Harrison unexpectedly had the ball skip off his glove, between his legs, and into short right field.  Not expecting to have to back-up the usually sure-handed Harrison, RF Miles Durham was playing deep, and it took him a few extra seconds to get to the ball, giving Span the chance to reach second base on the error.  Owens walked SS Matt Tolbert to give the Red Wings two base runners and no outs.  Then Owens settled in — he got a grounder force out on Tolbert at second, sending Span to third, then got a pop out and a grounder to third to end the inning. 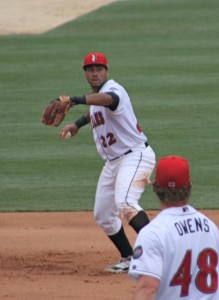 After that, Owens was brilliant.  He retired the next 12 batters in order, and by the top of the 6th, he had 5 no-hit innings under his belt, along with 3 strikeouts.  But the no-hitter ended there.  The 6th began with LF Brandon Roberts grounding to behind first base.  Owens hesitated just a second too long in moving to cover first base, forcing 1B Matt Hague to race Roberts to the first base bag.  Roberts won the race, and was safe at first with the Red Wings’ first hit of the game.  A grounder to short moved Roberts to second base.  After a strikeout, 2B Luke Hughes grounded through the hole and into left field, as Roberts raced around third and headed for home.  Pedro Ciriaco, playing in left field today for the Indians, scooped up the grounder and fired back in to C Jason Jaramillo.  The ball reached Jaramillo while Roberts was still a few feet up the third base line.  Jaramillo dropped to a knee and planted himself in front of the dish, then tagged Roberts on the chest before he could reach the plate. 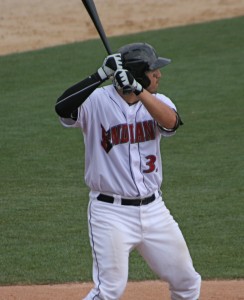 Owens finished his afternoon’s work with a quick 7th inning.  With one out, he walked DH Aaron Bates, then got RF Dustin Martin to bounce into an around-the-horn double play (3B Alvarez to 2B Harrison to 1B Hague) to end the inning.  Owens needed 101 pitches (65 strikes)  to get through his 7 innings today and earn  his 8th win of the season.  “I just tried to make my pitches and get in and out pretty quick.  I just got to take care of my pitch count and throw my pitches for strikes…. It’s been awhile, but it feels great to go seven again.”  Owens allowed just those 2 hits and 2 walks, while striking out 4.  On Tuesday, he threw 106 pitches in his 7 innings, and allowed 2 runs on 4 hits and 4 walks, with 2 strikeouts.

After going down in order in the bottom of the 1st, the Indians put two runners on base in both the 2nd and 3rd innings, but could not score.  Hague beat out the throw from 2B Tolbert for an infield hit in the 2nd, and Alvarez worked a walk, but the next three batters went down in order.  CF Gorkys Hernandez led off the bottom of the 3rd with a single off 3B Toby Gardenhire’s glove, but was picked off first.  SS Jordy Mercer also singled in the 3rd but was left on base. 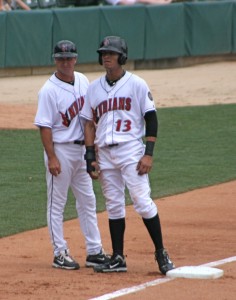 The Indians broke the scoreless tie in the 4th inning.  Alvarez rocketed the first pitch he saw off the left-center field wall for a triple, and Jaramillo drove him in with a liner sliced into right field.  The Tribe clung to that 1-run lead for the next two innings as Owens worked his magic.  In the bottom of the 7th, Jaramillo started a rally with a double down the left field line, just inside the third base bag.  The ball skipped under the Indians’ bullpen bench, and Jaramillo cruised into second as LF Brian Dinkelman (who had replaced Roberts) had to dig the ball out from under the bench.  Jaramillo had to hold at second base on a grounder to short, but he scored easily from second when Hernandez smashed the second triple of the game off the left-center field wall.  (Photo — Hernandez on third, with coach Jeff Branson.)

The Indians added one more insurance run in the 8th with three consecutive singles.  Hague slipped another single past 3B Gardenhire with one out.  He advanced to third on Alvarez’s grounder through the hole on the right side of the infield.  DH Andy Marte lined into left-center field, bringing Hague in from third base to give the Indians a 3-0 lead. 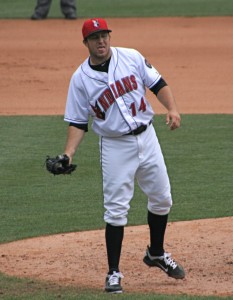 All that remained was for the Indians’ bullpen to mop up.  Danny Moskos pitched the 8th, allowing a single up the middle to C Steve Holm.  Tim Wood earned his 18th save of the season with a perfect 9th inning.

The win gives the Indians a 2-1 lead in this 4-game series, and a 4-3 lead in the season series with the Red Wings.  The Indians now have a 53 – 50 record, and remain in third place in the International League West Division.  They are one game behind second-place Louisville, and 11.5 games behind the first-place Columbus Clippers.  The wild-card race is still in play, with the Indians in 5th place.  Pawtucket leads that race, with Gwinnett just 1.5 games behind.  The next three teams are close — Scranton/Wilkes-Barre is 4 games back, Louisville is 4.5 games back, and the Indians are 5.5 games back.

Indians’ Hitting Gems of the Game:  A pair of triples off the left-center field wall, which both had the Rochester outfielders scrambling to chase down the caroms.  Pedro Alvarez tripled in the 4th, and scored the Indians’ first run.  Gorkys Hernandez tripled in the 7th, driving in Jason Jaramillo with the second run of the game.

Indians’ Defensive Gem of the Game:  In the 6th inning, with Brandon Roberts on second base, Luke Hughes singled into left field.  Pedro Ciriaco picked up the outfield assist as Jason Jaramillo blocked the plate and tagged out Roberts at the plate to end Rochester’s closest chance of scoring.

The game was delayed by about 50 minutes by a short storm, which also had the advantage of dropping the game-time temperature below 90 degrees for the first time in this homestand.