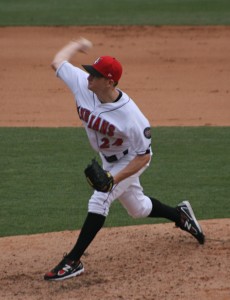 For the second night in a row, the Indians’ pitchers made up for thin offense with strong pitching performances, to lead the Indians to a win at Knights’ Stadium in the suburbs of Charlotte, NC.  This was the Indians’ last meeting of the season with the Charlotte Knights.  The win tonight gave the Tribe a split of this series in Charlotte, and a win of the season series, 5 games to 3.

Pirates’ starter Ross Ohlendorf made his first rehab start for the Indians tonight.  He’s made two rehab starts for the Bradenton Marauders and one with the Altoona Curve, but none of those were as good as tonight’s start.  Ohlendorf earned the win, going 5 innings and allowing just one run on 3 hits and 3 walks, with one strikeout.  He threw 73 pitches, with 42 of them strikes.  Tim Wood (photo) finished the game with a perfect 9th inning, to earn his 20th Save of the season.

Ohlendorf took the mound with one run already in his pocket.  In the top of the 1st, with two outs, LF John Bowker slipped a single up the middle, and Ryan Doumit, getting the DH duty tonight, smashed a triple into the right-center alley for an RBI triple, scoring Bowker.  Ohlendorf struggled a bit in the bottom of the 1st.  He gave up a lead-off single to Charlotte LF Tyler Kuhn, then got two fly outs.  Two more singles, to 1B Dallas McPherson and CF Jordan Danks, brought Kuhn around to tie the score.  The inning ended when Ohlendorf picked Danks off first base.

The Indians got Ohlendorf another run in the top of the 3rd.  CF Gorkys Hernadez led off with a double into center field.  He advanced to third base when SS Jordy Mercer grounded out, then scored on 2B Josh Harrison’s sacrifice fly.  Indians ahead, 2-1.  Hernandez doubled again in the 4th inning, following a walk to C Dusty Brown.  The two-out double into the left field corner had Brown racing around from first base in an attempt to score, but the throw in from LF Kuhn, with the relay by SS Eduardo Escobar, was on-target and on time, and Brown was tagged out at the plate.

Those three singles Ohlendorf surrendered in the 1st were the only ones he allowed.  He walked 3B Gookie Dawkins in the 2nd, and DH Josh Phegley in the 4th, and left both on base.  Dawkins also walked to begin the 5th, but was erased on 3-6-3 double play:  1B Matt Hague to SS Mercer and back to Hague.

The Tribe had just one runner reach base over the 5th, 6th, and 7th innings.  That was Harrison, who was hit by a pitch in the 5th.  With two outs in the 8th, Doumit picked up his second hit of his rehab assignment, a single up the middle. This time it was Hague’s turn to triple, and Doumit raced around from first to score an insurance run for the Indians, 3-1. 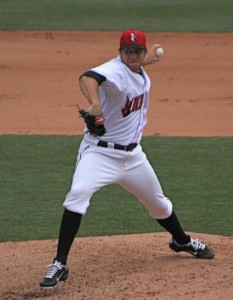 Daniel Moskos (photo) relieved Ohlendorf to begin the 6th.  He was greeted with a single lined into left field by Escobar, who then stole second base.  Moskos struck out Lastings Milledge and McPherson, then Danks lined another single into right field.  With Escobar rounding third, RF Miles Durham fired the ball back to C Brown.  The throw and Escobar reached the plate at about the same time, but Escobar slid around the tag.  However, the alert Brown noticed that Escobar had slid around the plate too.  So, he reached over and applied a late tag, and Escobar was called out.

Moskos gave up two more hits in the next two innings.  C Donny Lucy singled in the 7th, but the hit in the 8th was a solo home run by Milledge, edging the Knights closer:  3-2.

Dusty Brown led off the top of the 9th with a walk.  After a pop out, though, Brown was caught stealing in a strike-em-out-throw-em-out double play.  The Tribe went into the bottom of the 9th holding tight to a one-run lead, with closer Tim Wood on to pitch.  Wood got Danks to line out to right field, then struck out both Phegley and Lucy to end the game and earn his 20th Save.

The Indians next travel to the suburbs of Atlanta for a 4-game series against the Gwinnett Braves.

Indians’ Hitting Gems of the Game:  Two RBI triples, by Matt Hague and Ryan Doumit, which drove in two of the three Indians’ runs.  After the game, Doumit was pleased with his running.  “Tonight was a good test for my ankle.  It was nice to be able to run the bases.  It’s nice to get out there, it’s nice to run and know that my swing’s getting to where it needs to be.”

Indians’ Defensive Gem of the Game:  In the bottom of the 6th, with Eduardo Escobar on second base, Jordan Dankes lined into right field.  Miles Durham made the throw in to the plate for the outfield assist, as Dusty Brown made the tag (or, a swipe and then a tag) at the plate.

Pedro Ciriaco was called back up to the Pirates today.  He is taking the roster spot opened up when reliever Chris Leroux was placed on the DL.