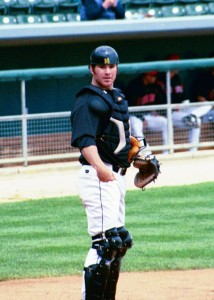 This was nothing short of a gut punch. The Pirates scraped together a six run fourth inning to take a two run lead only to watch the bullpen surrender three runs in the eighth. The result was the seventh straight loss for a club that is badly in need of answers as they slip – quickly – out of contention in the National League Central race.

The Pirates put up a six spot in the home half of the fourth to take the lead. Garrett Jones doubled and one out later Ryan Ludwick’s first Bucco knock was an RBI single. Consecutive singles from Pedro Alvarez and Ryan Doumit loaded the bases. Xavier Paul’s RBI grounder tied the game. Brandon Wood walked to bring McDonald to the dish with two outs and the bases loaded. He came through with a three run double that put Pittsburgh up. He came around to score when Andrew McCutchen also doubled.

The Pirates exited the fourth with a two run lead. Bolstered by the support, McDonald retired nine of the next ten Cubs. Only Aramis Ramirez reached base and that was on an error from Alvarez that proved to be no harm.

Daniel McCutchen was called on in the eighth. He gave up singles to Reed Johnson and Starlin Castro and then hit Darwin Barney to load the bases with no one out. Jason Grilli relieved and gave up a single to Ramirez to score one run. Joe Beimel relieved and walked Pena to tie the game at six each. Beimel left in favor of Jose Veras. Marlon Byrd lofted a sac fly that broke the tie and Veras got the next two hitters without more damage.

James Russell and Kerry Wood combined on a scoreless bottom of the eighth and Carlos Marmol tossed a perfect ninth to end the game.

McDonald went seven and gave up four runs on a single and three dingers. He walked none and struck out three. Lopez was lifted off the hook. He gave up all six Pirate runs in four innings. He gave up seven hits and walked two. He struck out none. Jeff Samardzija was the winner with a scoreless inning in relief. McCutchen suffered the loss.

The Good
Have to like the way that McDonald kept his head after being taken deep three times. And he delivered what looked to be at the time as a tide-turning bases clearing double.

Jones and Doumit both had two hits.

The offense put up six runs in one inning.

The Rest
Lopez is still 1-0 against Pittsburgh. McDonald has no decisions against the Wriglies.

After getting plunked on the hand yesterday, Derrek Lee was a scratch from this game.

McDonald had zero RBI and one career double entering the game.

After a 14 game streak of not scoring more than five runs in a game, the Pirates have scored six twice in the last three games.

The six run inning matches the Pirates best single inning of the year. The last time they did it was in the sixth inning on 5/20 against Detroit. They also did it in the third inning on 5/4 in San Diego.

Bryd singled in front of DeWitt’s fourth inning dinger for his 1,000 career safety.

This was the seventh time in 2011 the Pirates struck out three or fewer times in a game. Last time was 7/8 in a win against the Cubs.