The Indianapolis Indians posted 13 hits this afternoon at Victory Field, but that wasn’t enough to beat the Toledo Mud Hens, who scored 11 runs on 14 hits.  Every member of the Tribe’s starting line-up had at least one hit,  while 1B Matt Hague, DH Jeff Clement, and 3B Josh Harrison had two hits each.  Rehabbing Jose Tabata went 1-for-4 at the plate and played 5 innings in left field.

Tribe starter Garrett Olson usually gives up a large number of walks but is stingy with hits.  Unfortunately today, Olson did the opposite — in 4.1 innings, he allowed just 2 walks but 10 hits, for 6 runs.  That is the highest number of hits and runs he’s surrendered in any of his starts (or relief appearances) this season.

The Mud Hens began their assault with one run in the top of the 1st.  Olson walked former Indy Indian CF Jeff Salazar, and a wild pitch moved Salazar to second base.  DH Timo Perez ripped a liner into the right-center field alley, and Salazar raced around to score from second base, giving Toledo a 1-0 lead.  The Mud Hens picked up 3 more runs in the 2nd, when they opened that inning with three consecutive hits:  singles by 3B Brandon Inge and LF Ben Guez (who beat out the throw on a bunt), and a 2-RBI double by RF Clete Thomas. Thomas’ double zipped past the diving CF Gorkys Hernandez, and when he tracked the ball down, Hernandez’s throw in to the plate was not in time to catch Guez. Thomas tagged up and advanced to third base on a fly out by former Indy Indian SS Argenis Diaz, then scored on another fly ball by C Max St. Pierre.  Mud Hens 4, Indians 2. 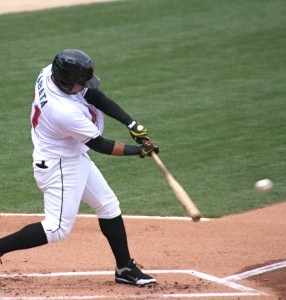 The Tribe batters faced off against  Toledo’s Andy Oliver, who was a college teammate of 2B Jordy Mercer and 1B Matt Hague at Oklahoma State.  Oliver surrendered 11 hits and 5 walks, but only 5 runs, and only 3 of those were earned.  The first two runs came in the 2nd inning, when Oliver walked Clement, then gave up back-to-back singles to Harrison and C Eric Fryer to load the bases.  SS Brian Bocock struck out, but CF Gorkys Hernandez came through with a 2-RBI single just beyond the reach of Toledo’s 2B Danny Worth and into center field.  That cut the Hens’ lead to 4-2.

The Indians continued to put runners on base — in fact, they did not go down in order until the 9th inning.  Hague and Clement hit back-to-back singles in the 3rd inning, but could not get around to score.  Bocock led off the 4th inning with his first hit since joining the Indians — a line drive single into center field.  Hernandez walked, and Tabata collected an infield single when he smacked a ball right back to the mound.  Oliver stuck his glove up in self-defense, and the ball caromed off the glove to a spot behind the mound but in front of second base.  By the time 2B Worth got to the ball, Tabata was safe on first and the bases were loaded.  The Tribe could not capitalize on the opportunity, however.  Mercer struck out, and RF John Bowker bounced into an inning-ending double play.  That made 5 runners left on base over those two innings, and 8 runners left on in 4 innings.

Olson surrendered two more runs in the 4th.  Clete Thomas led off with a single up the middle.  He scored moments later when St. Pierre took a long fly ball over the left field wall, just inside the foul pole, for a 2-run homer.  Olson also gave up a walk to Inge and a double down the left field line by Guez with one out in the 5th.  At that point, manager Dean Treanor took the ball from Olson and brought in Steven Jackson from the bullpen.  Jackson got out of the inning with a walk and a ground out.

The Indians again cut the Mud Hens’ lead in half in the bottom of the 5th.  Clement picked up his second single of the game with a grounder into left field, and he advanced to second base on a wild pitch.  That put him into scoring position for Harrison, who doubled into left-center field.  The throw back from the outfield came into second base in time, but Harrison slid in under the tag as Clement scored.  Harrison stole third base as Bocock took ball four, , then Hernandez also walked, and the bases were loaded with two outs.  Those three runners were also left on base, when Tabata grounded into a force out at second.  Tabata left the game after that inning, replaced by Miles Durham, who took over right field, while Bowker moved from right to left field.

Mud Hens’ Danny Worth got that run back for Toledo in the top of the 6th.  With one out, he singled through the hole and into left field, then stole second base.  C Eric Fryer’s throw down to second sailed into the outfield, and Worth went on to third base on the throwing error.  A sacrifice fly by Salazar plated Worth, and the Hens had a 7-3 lead.

Once again the Indians cut into the Mud Hens’ lead.  Mercer led off the bottom of the 6th with liner into right field.  Hague also singled to right, pushing Mercer to second.  With both runners off and going, Clement grounded to second, moving the two runners into scoring position.  That was the end of Oliver’s afternoon, though both runners on base were still his responsibility.  Josh Harrison greeted reliever Ryan Perry with a hard grounder to the left side of second base.  SS Diaz lunged for the ball, which hit his glove, then deflected into left field for an error.  Both Mercer and Hague scored standing, as the the outfielders chased down the ball, then the throw back to the infield was off line.  Both of those runs were charged to Oliver, but were unearned.  The Hens were still up, 7-5, but the Indians still were in the game….

…Until the Hens broke it open in the top of the 7th.  With Jackson still on the mound, the first five Toledo batters reached base.  1B Ryan Strieby led off with a double off the left field wall.  Inge walked, and Guez lined a single into center field, loading the bases with Hens.  Jackson ran the count full on Clete Thomas, then walked him, forcing in a run.  Diaz lined a single down the right field line, driving in both Inge and Guez and moving Clete Thomas to third.  Jackson headed for the showers, as Justin Thomas came on in relief.  Thomas retired the next three batters, though the first one, St. Pierre, flied out, which allowed Clete Thomas to score on the sacrifice.  Mud Hens 11, Indians 5.

Justin Thomas pitched a scoreless 8th inning, allowing just a walk to Strieby.  Jose Ascanio pitched the top of the 9th.  That was also a scoreless inning, with a walk to Diaz.  The Mud Hens had put a runner on base in every inning of the game.

The Indians also put one runner on base in both the 7th and 8th innings.  Durham singled in the 7th and Bowker doubled of the top of the right field wall in the 8th, but both were left stranded.  Then the Tribe went down in order in the 9th.

The loss gives the Indians a split of this 4-game home stand.  The two teams will migrate up to Toledo for two more games on Monday and Tuesday.  The Indians will then proceed to Columbus for two games against the Clippers, then on to Louisville for 4 games against the Bats.

Indians’ Hitting Gem of the Game:  Gorkys Hernandez’s 2-RBI single with the bases loaded in the 2nd inning.  The Indians had the bases loaded 3 times in the game, and Hernandez had the only clutch hit to drive in runs in the bases-loaded situation.

Indians’ Defensive Gem of the Game:  With two runners on base and two outs in the top of the 3rd, Ben Guez grounded sharply to third base.  Josh Harrison made a tough scoop, then fired across his body to second base for the force out to end the inning and leave the two runners stranded.

This was only the 3rd game in the Indians’ last 13 that was NOT a one-run game.  Two of their last 8 were also one-run games.

Josh Harrison has reached base safely in 27 of his 29 games at Victory Field this season.

Update from yesterday:  Remember how Gorkys Hernandez had tripled in the 2nd, then with Jose Tabata at the plate, Hernandez was out on a messed-up squeeze play?  It turns out that it was Hernandez, not Tabata, who missed the sign, or rather, misunderstood the sign.  Tabata had been astonished to see Hernandez coming toward the plate, thinking that he was on a rehab assignment to get in swings and get hits, not to be bunting.