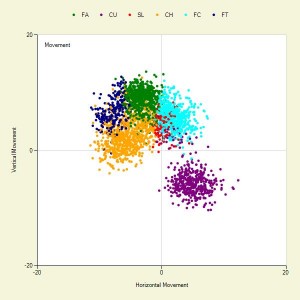 Marcum generates plenty of swings-and-misses despite underwhelming velocity. His fastball sits in the 86-89 range, and only occasionally touches 90 MPH. He does a good job of varying his offerings and staying away from the middle of the plate. He has gone to his low 80′s changeup a bit under 30% of the time this year and, while the pitch remains very effective, it has generated fewer swings-and-misses than it did in 2010. Marcum throws a slow curve, which sits in the low 70′s but can dip all the way down to 65 MPH. He also mixes in a mid 80′s cutter and a low 80′s slider on occasion. His bread and butter remains the changeup, which he is perfectly willing to throw to both righties and lefties. 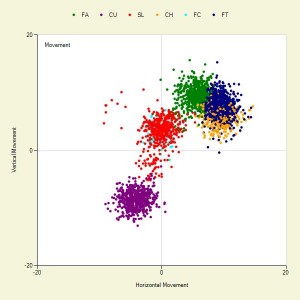 Wolf’s fastball sits in the 88-89 range and touches 91 MPH. He is somewhat unusual for a soft-tossing southpaw, in that his four-seam fastball misses a good number of bats while his secondary stuff is very hittable. His two-seamer is similar velocity-wise to his four-seamer, with decent tailing movement. He also throws a mid-80’s slider (or it may be a cutter), an upper 70’s changeup and a very slow curve that generally sits in the upper 60’s. He generally uses the fastball/slider combo against left-handers, and goes to the curve and change much more against righties. 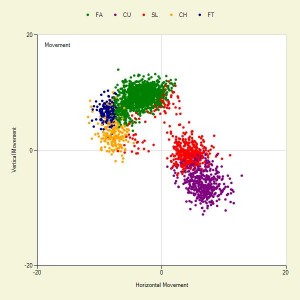 Greinke has been dominant after missing the first month of the season with a rib injury, much better than his 3.86 ERA would indicate. He has produced an impressive 197 strikeouts and 44 walks in 165.2 innings. He throws in the low 90’s, and can run his four-seamer up to 95 MPH at times. His fastball velocity is down a bit this year, as he occasionally got into the upper 90′s in the past. Looking at the data, it seems as if he has greatly reduced his use of the sinking two-seamer this season. That may just be a change in the classification algorithm, though. Greinke also throws a slider in the mid 80’s, a curve in the mid 70’s and a change in the mid 80’s. He probably throws several different variations of the curveball, as the pitch’s velocity ranges from about 60 to 80 MPH. The slider has long been his out pitch, with a whiff rate that sits well above average. That said, his other pitches miss plenty of bats as well.