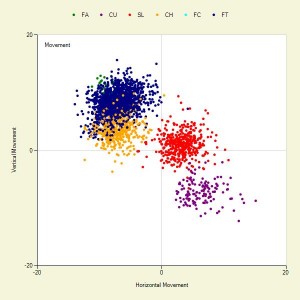 Lohse is a soft-tossing right-hander with very hittable stuff. He throws a two-seam fastball that sits in the high 80’s and gets up into the 90-91 range at times. His best pitch is probably a circle change that sits around 80 MPH and generates an above average whiff rate. The rest of his pitches are regularly put into play. In fact, in 691 batters faced this year, his fastball has only led to about 28 swings-and-misses. Lohse also throws a low 80’s slider and mixes in an occasional slow curve. He generally works on the outer half of the plate, but will occasionally work inside on left-handers with the two-seamer. 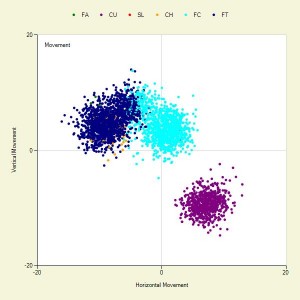 Carpenter does not have a very diverse repertoire. He pounds the zone with a sinking fastball that sits in the low 90’s and touches 95 MPH. He also throws a plus cutter in the upper 80’s and an above average mid 70’s curve. The cutter is his big swing-and-miss pitch, with a whiff rate just a touch under 30%. Both the cutter and fastball show strong sinking movement, which leads to his excellent ground ball rates. That ground ball rate is down a bit this year, but is still comfortably above average. Carpenter generally works in all four quandrants of the strike zone, making him even more effective. 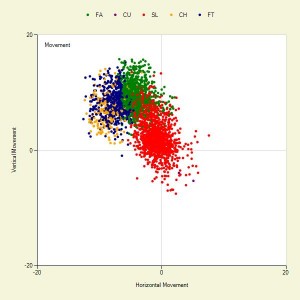 Jackson is your typical power pitcher, with a fastball that sits comfortably in the mid 90’s and can touch the 97-98 range. He also throws a hard slider in the upper 80’s that generates a good number of swings-and-misses. Occasionally, he will mix in a mid 80’s changeup to keep hitters honest. Despite the power repertoire, Jackson’s whiff rate is usually right around league average, as his fastball is surprisingly hittable. It seems that opposing teams tend to stack the lineup with left-handed batters when facing Jackson. He has faced more lefties than righties, both this season and over his entire career. That is unusual, especially considering the fact that he has never had much of a platoon split.