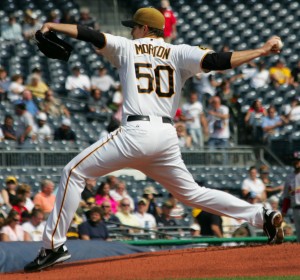 Charlie Morton earned his tenth win by pitching six scoreless innings then watched the bullpen give up three runs and nearly blow it for him. Pedro Alvarez and Derrek Lee homered in support of Morton.

Pittsburgh got on the board in the first inning against Daniel Hudson of Arizona. Alex Presley and Neil Walker each doubled to create one tally. Arizona almost came right back. With two outs and runners on the corners, Garrett Jones made a diving/sliding catch of a line drive down the line in right off the bat of Paul Goldschmidt to end the inning.

In the second inning Pedro Alvarez homered to make it 2-0. Hudson showed some wildness and walked Andrew McCutchen and Derrek Lee with one out in the fifth. Ryan Doumit doubled to give Pittsburgh a three run cushion.

Chris Leroux relieved Morton and gave up consecutive singles to Gerardo Parra and Sean Burroughs to start the seventh. He was pulled for Jason Grilli. Willie Bloomquist added a single that scored Parra. But Grilli got Aaron Hill, Justin Upton and Miguel Montero without allowing another run.

David Hernandez gave up a two run homer to Lee in the eighth after Presley led off the inning with a double to give the Pirates a 5-1 cushion. The bottom of the eighth was dicey. Jose Veras relieved Grilli. He gave up a one out double to Chris Young. Ryan Roberts singled him in. Parra followed with a single and ended the night for Veras. Tony Watson was called upon. He retired Geoff Blum on a pop fly, but Bloomquists bunt was thrown errantly by Alvarez, allowing all runners to be safe and another run to come home. That made the score 5-3. But Hill flied out to end the threat.

Joel Hanrahan tossed a perfect ninth to end the game.

Bucs collected 14 hits. They scored five runs or more for just the fourth time this month.

Pirates had eight extra base hits.

The Bad
The bullpen gave up three runs in three innings.

Bucs had two runners picked off.

The Rest
Morton had a 1-1 mark against Arizona with his lone win coming in 2008. Hudson had gotten nondecisions in his two prior starts against Pittsburgh.

Last time the Bucs had 14 hits in a game was August 19th in a loss to Cincinnati when they collected 15 safeties.

Morton is the second Pirate in 2010 to reach double figures in wins.

This was the first time in his career tht Morton had more than one hit in a game.

69 wins is the most the Pirates have had since winning 72 in 2004 in Lloyd McClendon’s last full year as manager.

Bucs have two double digit winners (Morton and Kevin Correia) in 2011 after having none in 2010.