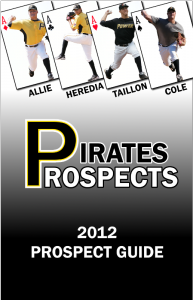 Last year Pirates Prospects debuted the Prospect Guide, featuring the most in-depth look in to the Pittsburgh Pirates farm system that you could find anywhere.  The 2011 Prospect Guide featured a profile on every player in the system, as well as various resources, including Rule 5 dates, Minor League Free Agency dates, the top draft and international bonuses in team history, and much more.  The book also included exclusive interviews with Jameson Taillon, Stetson Allie, Zack Von Rosenberg, and Zack Dodson.

We’ve already begun work on the 2012 Prospect Guide, and so far it is shaping up to be an outstanding follow-up to the 2011 version.  The 2012 Prospect Guide will still feature profiles of every player in the system, along with helpful resources like the bonus information, and any Rule 5 and Minor League free agency dates.  We’ve also added a lot more to the 2012 version, making it an improvement over the already strong 2011 product.  Best of all, you can now pre-order the 2012 Prospect Guide, which is expected to be completed right after the 2012 Winter Meetings, and is expected to ship in mid-December, just in time for Christmas.  To pre-order the book, head over to the products page and place your order.

This year, the cover features top pitching prospects Gerrit Cole, Jameson Taillon, Luis Heredia, and Stetson Allie.  The cover has been completed, and can be viewed to the right (click on the image for a bigger version).

The 2011 version featured interviews with Taillon, Allie, Von Rosenberg, and Dodson.  For the 2012 version, we’ve interviewed Gerrit Cole, Jameson Taillon, Luis Heredia, Stetson Allie, Josh Bell, Starling Marte, Tony Sanchez, and several other players, with a featured article for each player.  Also contributing to each article will be input from Kyle Stark, as well as the coaches and managers for each player.

The individual player profiles have been redesigned to give a cleaner look, and provide more information.  We’ve added extra stats to each player from the 2011 version, and still include the player’s career statistics in their profile.  We’ve also cleaned up the “Biography” and “Contract Information” sections, with easy to find information on each player, such as their height, weight, the high school or college they went to, how they were acquired, their signing bonus, and more.  And of course, each player profile will include a scouting report, compiled from information we’ve gathered while seeing each player in action, along with talking to their coaches, members of the Pirates’ organization, scouts outside of the organization, and the players themselves.

A new feature this year is a look in to the scouting department.  Each player profile includes the name of the scout that signed the player.  There is also an additional section looking at the active scouts in the organization, with a quick rundown on the top players they’ve signed, and the areas they cover.

The top 50 prospects will be featured with full page profiles, including expanded scouting reports, and photos of each player in the profile.  The profiles for the remaining players won’t include photos, and won’t be a full page, but will still feature all of the information we can find on each player, and that includes international prospects who have yet to make the jump to the United States.

We’ve also lowered the shipping prices from last year.  This is all thanks to the success of the 2011 version, which gave us a better forecast of how many books we will sell in 2012.  That allowed us to order our shipping supplies in bulk this year, allowing us to get lower prices on supplies, which translates to a lower fee for shipping.

Around late-January/early-February 2012 we will be releasing our other book, the Pirates Prospects 2012 Annual.  The Annual looks at the major league team, with profiles for all of the players on the 40-man roster, the non-roster invitees for Spring Training.  It will include featured articles on several of the team’s top performers, interviews with Neal Huntington and Frank Coonelly, and Matt Bandi’s projections for each individual player in 2012.

The Purpose of the Prospect Guide

If you enjoy this site, and the information it provides, then I ask that you show your support by purchasing a copy of the Prospect Guide.  Not only will you be receiving the best product that you can find on the Pirates’ system, you will also be helping this site continue to grow.

The 2011 Prospect Guide allowed me to do this full time, which meant it paved the way for all of the site’s coverage in 2011, including:

-A week of reporting from Spring Training.

-Reports from the Florida Instructional Leagues.

-Live reports from every team in the system throughout the season.

In 2012 I want to expand this coverage once again.  I want to provide coverage from Spring Training for the entire month of March, with features, reports, and prospect videos that would be worthy of a pay site.  I want to provide more live coverage throughout the season from the team’s minor league affiliates.  I want to provide a longer look at the instructional leagues, and possibly even a live look from the 2012 Arizona Fall League.  Most importantly, I want to be able to continue to provide a site that keeps track of everything that is going on in the system, from top to bottom.  That includes staying on top of draft pick signings, and allowing the site to continue breaking more Pirates draft signings than any other outlet.

My goal is to provide the best coverage of the team that you can find, all while keeping the site free.  That is only possible through the sales of the Prospect Guide and the Annual.  Not only do you get two great products that detail the Pirates’ system from top to bottom, but you also get to help this site grow to provide even more coverage of your favorite team.

Pre-order your copy today, get the best look at the minor league system, get a coupon for $5 off the Annual, and allow this site to continue to grow.