Today on Pirates Prospects we start a new feature called This Date in Pirates History where we will cover either an important event from that specific date or highlight a player born on that date. Today we start with Gene Clines who was born on this date in 1946. He was drafted by the Pirates in the 6th round of the 1966 amateur draft. He signed ten days later, and the 19 year old Clines reported to the Salem Rebels of the Appalachian League. 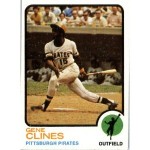 The 5′ 9″ Clines moved fairly quickly through the bottom of the Pirates system playing outfield, third and some second base.  He spent one year in A ball before moving to the AA York Pirates as a 21 year old. He was overmatched that first season so he returned there for 1969 and stole 63 bases while hitting .268 with 48 walks. He returned again to AA for 1970 but would hit even better(.310) and earn a promotion to the big leagues by the end of June, never returning to the minors.

Clines started just three games the rest of the 1970 season, playing mostly as a pinch hitter and he did well in his scattered playing time hitting .405 in 37 AB’s. In 1971 the Pirates made the playoffs and Clines played all three outfield positions, getting 300 plate appearances over the entire season, hitting .308 with 15 stolen bases. In the playoffs against the Giants, Clines started game two and homered in the 5th inning as the Pirates won 9-4. In the World Series he played three games and had just one hit but the Pirates still won the series over the Orioles.

In 1972 Clines had his best season, hitting .334 in 107 games while again playing all three outfield positions. In the playoffs against the Reds he went 0-2 as the Pirates lost the series. Clines slumped in 1973 lowering his average down to .265 and in 1974 he dropped even more batting just .221 but he was fairly consistent with his playing time getting into between 107-110 games each year from 1972-1974. The Pirates lost in the 1974 playoffs to the Dodgers and Clines had just one AB in the series.

Immediately following the season the Pirates shipped Clines to the Mets in exchange for catcher Duffy Dyer. In 452 games with the Pirates, Clines batted .287 with 51 stolen bases. He would play in the majors until 1979 making stops with the Mets, Rangers and Cubs.

Also on this date in 1903 the Pirates won game four of the World Series. A recap of that game can be read here.

In 1971 the Pirates defeated the Giants in game four of the National League Championship series by a 9-5 score to win the series 3 games to 1 and move on to the World Series to face the Orioles. Steve Blass started against Gaylord Perry but both pitchers got batted around, each giving up five runs in the in the first two innings. Bruce Kison got the win in relief and Al Oliver hit a three run homer in the 6th to make the score 9-5.