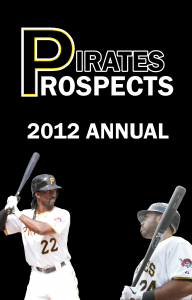 The Pirates Prospects 2012 Annual, which will be released at the beginning of February, is now available for pre-sales. The Annual takes a detailed look at every player on the major league roster, along with every player who will be invited to Major League Spring Training. Each player profile features a write up on the player, the player’s career stats, contract information, option years remaining, and exclusive statistical projections for the 2012 season.

Along with a profile of every player on the Major League roster, the book will feature several articles ranging from historical views on the team, a detailed statistical look at some of the individual results from the 2011 season, a guide to understanding some of the top advanced statistics, a look in to the team’s scouting department, and a breakdown of the rest of the teams in the NL Central heading in to the 2012 season.

Last year’s Annual featured an extremely detailed look at Andrew McCutchen’s defense in center field, a look back at what went wrong with the “Five Year Plan” in 1996, a detailed breakdown of the big four (McCutchen, Jose Tabata, Pedro Alvarez, and Neil Walker) heading in to the 2011 season, and a WAR-based team projection that predicted a 75-87 record for the 2011 season.

The 2012 Annual will be released in early February, although you can pre-order your copy of the book today by going to the Products page. For those of you who have ordered the 2012 Prospect Guide, there is a coupon code on the back page of the book that you can use for $5 off the Annual. If you haven’t ordered either book, you can buy both together for a discounted rate. The Prospect Guide will be shipped right away, and the Annual will be shipped when it is released.

Go to the Products page to pre-order your copy today.