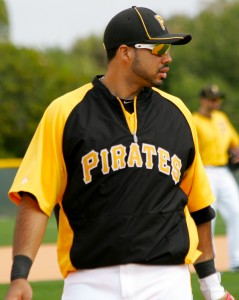 BRADENTON — Pedro Alvarez and Andrew McCutchen both tweaked their batting stances this offseason. McCutchen hit just .216 after the second half of the season in 2011 after a strong first half that named him to the National League All-Star team. Alvarez appeared in just 74 games with Pittsburgh with a .191 average after a solid 2010 where he was named Rookie-of-the-Month in September.

With a goal to improve upon their 2011 seasons, both Alvarez and McCutchen are already seeing great results this spring.

Looking to bounce back from a disappointing season, Alvarez has been working on a different stance at the plate. Alvarez, has exaggerated the toe tap that he started incorporating towards the end of last year.

“Pedro was working and searching for some things to do last season,” Pirates Manager Clint Hurdle said. “He talked to some people, talked to some guys similar body types that he thought might be able to get a feel for. It was a small toe tap at the end of the season. Now he took it out to California, exaggerated it a bit more.”

A former first-round pick by the Bucs in 2009, the Pirates need Alvarez to swing the bat like the player who hit 16 bombs over 95 games his rookie season in 2010.

“He’s just really collecting himself by coming back and holding that position,” Hurdle said. “He’s got the toe, ankle, knee moving the ball, a little bit of body position, he’s getting a swing off it.”

McCutchen had a huge first half for the Pirates, where he hit .291 with 14 homers, 54 RBI, scored 54 runs and stole 15 bases over 88 games. McCutchen, who is looking to sustain that success over an entire season, changed his batting stance over the off-season by moving his left foot back. The decision was made by Andrew himself.

“Andrew took ownership of that, evaluated some things last year,” Hurdle said. “[He] was looking for a position that he could establish early, just to get himself in a better hitting position.”

Hurdle said the first guy he ever saw using an exaggerated open stance was Andres Galarragra, a former first baseman who played 19 seasons in the big leagues. How the new stance can help McCutchen will tell, but so far this spring, Hurdle likes what he sees.

“After he had some challenges to try and find a way to get back to better square position when it front foot hit’s the ground, different body types can present different challenges, and Andrew just feels really comfortable now with that little opening in the front side, setting it down soft,” Hurdle said. “It’s getting him back towards the pitcher at first step, back towards the middle but he’s not crossing himself. It’s getting him squared up, keeping the barrel in the zone longer from back to front.”

“He worked hard at it during the winter and brought it in here and we like what we’re seeing.”