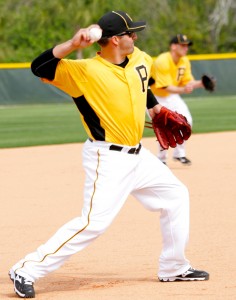 BRADENTON — Being able to play multiple positions not only takes talent and dedication, but it apparently also requires a big equipment bag. Once Spring Training games kick off for the Grapefruit League on March 3, Jake Fox will be carrying around nine gloves. Nine.

“I will have a game glove for each position, a backup, and as a catcher I usually carry three gloves,” Fox said.

The 29-year-old was first drafted as a catcher in 2003 by the Chicago Cubs, and was first turned into an utility player by then-manager Lou Pinella.

“I first started playing the outfield, then the infield, then its just been a circus ever since,” Fox said.

Fox’s versatility can be a huge asset to the Pirates for the 2012 season. Not only can Fox catch, but he can play first, second, third, and the corner outfield spots.

“Being able to play that many positions, I think, has gotten me a job every year,” Fox said at Pirate City prior to workouts on Saturday. “The Manager sees the benefit to having a guy that can move around, whether it’s to carry an extra pitcher, whether it’s to carry an extra hitter, you take your pick. I’m a guy who has to do a lot more hard work to stay up with these guys, these guys are phenomenal athletes. I always felt like I was overmatched athletically, but because I was able to put the work in and learn different positions, I feel like what keeps me on the same playing field as most of these guys.”

Fox has spent part of the last three seasons in the Majors, most recently last year with the Baltimore Orioles. Over 27 games, Fox hit .246 with eight runs, four doubles, a homer and six RBI. Over the off-season, Fox said he had several teams inquiring about him, but said it came down to Minnesota and Pittsburgh.

“I had a few choices,” Fox said. “It came down to the Twins and the Pirates because I liked the guys on the team. The guys here are great guys to be around, a lot of fun. But more importantly, I talked to the front office of the Pirates. In my career, I felt like I’ve been fighting an uphill battle just to find an opportunity, get a chance. Everybody in the locker room just wants a chance. It’s up to me to make it happen. The Pirates said to me, ‘If you come in and hit, you’ll have a chance. You’ll have an opportunity.’ And that’s what I’m looking for.”

His opportunity with the Pirates came with hard work over the off-season. Fox said he wanted to focus on two things. The first, his approach at the plate.

“I think as a player you’re always either getting better or getting worse,” he said. “I don’t think you ever stay the same. So I had to find a way with minimal at-bats last year to improve, to get better. If I’m going to come in and compete for a job in spring training, I needed to get more than 60 at-bats in the big leagues. That’s one of the reasons why I went down to play winter ball, to work on my approach at the plate.”

“One of the biggest criticisms for me offensively is [being] very aggressive. [I] swing a lot, and I know that. That’s one of the things I’m trying to clean up in my game, especially when you’re coming in. I don’t now exactly how I’m going to be used yet. I haven’t had my meeting with [Pirates Manager] Clint [Hurdle] yet. In the National League, there’s pinch-hits and you got to come in and have a quality at-bat every time. I really wanted to make sure that I was swinging at the pitches that I wanted to swing at, not swinging at the pitches the pitcher wants me to swing at. That was the biggest thing I wanted to improve upon this off-season.”

The next thing focused on was getting into great shape.

“After I was done [playing winter ball], I came back and I wanted to get myself in the best shape that I’ve been in my career,” Fox said. “And I did. I dropped about 10-12 pounds, I lowered my body fat from 15 or 16 percent, down to 10 or 12. I came in very good shape and I know coming into a new organization, those things are important. They see that you’re willing to work at it, willing to do what need to be done to ultimately win games.”

Fox contributes getting into the best shape from a mix of workouts and diet. Fox spent anywhere from 2.5 to 3 hours everyday at the gym, lifting and conditioning. He said the workouts were geared more towards shaping up, rather than bulking up.

“For my body type, that’s the hardest thing for me, is to not get bulky because then I get stiff,” Fox said. “So I had to implement some more stretching. I even did a few yoga classes in the off-season.”

Fox surprisingly enjoyed them. But don’t expect Fox to become a yogi just yet.

“It was okay,” Fox said. “It was a lot harder than I thought. Some of the positions they put you in are really good stretches. I really enjoyed some of that. I went to one called a hot yoga class. I was sweating so bad it was unbelievable. I think it really helped me this off-season. I feel like coming into camp I’m a lot more agile and mobile, and I think it helped me out.”

Fox isn’t one to set goals for spring training. He believes numerical goals are unrealistic most of the time. But Fox does want the staff to feel comfortable playing him any of the six positions he has on his belt.

“I think that’s the hardest thing, to get them to realize,” Fox said. “I think they do. When a guy plays that many positions, a lot of times you’ll find a guy that’s very average at five positions instead of being above-average at them. My goal coming in is to make them feel comfortable throwing me anywhere, anytime, any situation.”

He’ll be ready for the opportunity, no matter which position he’s called upon. Nine gloves waiting.