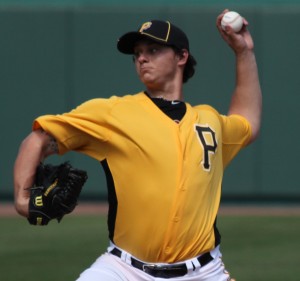 BRADENTON — Going from Double-A Altoona, to Triple-A Indianapolis, to Pittsburgh during the 2011 season — all within a month — was an unforgettable experience for left-hander Jeff Locke. After spending four months with the Curve, Locke was promoted to Indy, where he made just five starts before getting the call to the big leagues. Six days later he made his Major League debut against the Florida Marlins.

This offseason, Locke finally had a chance to let everything he achieved in such a short period of time soak in.

“The past season surely had me moving a moving around a bit towards the end,“ Locke said. “I did have a chance to really sit back this offseason and reflect on everything. What an unbelievable experience.”

Locke finished the 2011 season with a 8-10 record and a 3.70 ERA in 28 combined minor league games (27 starts) between Double-A Altoona and Triple-A Indianapolis. His 139 strikeouts finished second among all Pittsburgh farmhands. Locke was also named to the Eastern League mid-season All-Star team and tossed a scoreless inning in his home state of New Hampshire.

“When I was in Altoona to begin last season, all I could think about was how can I get out of here?,“ Locke said. “Instead of really taking ownership of my own games working to become a better pitcher, I was focused on [Triple-A], while still being in [Double-A]. Frustration set in of course, and I couldn’t really put two starts together. About two weeks, before the promotion to [Triple-A], I started putting some things together in the bullpen with pitching coach [Wally Whitehurst] and brought those things to the mound and started to roll a little.”

Locke’s success in the minors earned him a promotion to Pittsburgh. In the big leagues, Locke allowed 12 runs on 21 hits over 16.2 innings (four starts), struggling with his command.

“The biggest hurdle I had to cross last season was trust. And that’s also one thing I’d like to continue to improve on in the upcoming season,“ Locke said. “Trusting my stuff and letting it happen.”

This offseason, Locke has been working hard to improve for the 2012 season. The 24-year-old lefty exchanged the cold winter of his hometown of New Hampshire for the sunny skies of Bradenton, Fla., where he’s been since January –a month and a half early before the official report four days ago.

“Living in New Hampshire for part of the offseason, there’s only so much you can do sometimes. I’ve been coming down to Florida early for spring training for the past three years now. Most of the reason for me coming south so early, is just so I can get acclimated to the weather down here. With it being so cold back home, I just like being able to throw and run outside before [spring training] starts.”

Like many, Locke is heading into spring training in better shape from the year before.

“I cut some weight off and got into better baseball shape last season,“ Locke said. “I started eating much better and got on a better sleep schedule, making sure that I had breakfast every morning before I went to the field, little things like that. When I was heavier I found it harder to do some of the things I was doing before, involving balance, and weight transfer, keeping my weight on my back side.”

Locke is working hard to make another good impression this year. He was ranked by Pirates Prospects as the No. 11 prospect in the system prior to the 2012 season. Locke was also ranked No. 12 by MLB.com’s Jonathan Mayo, and No. 10 by Baseball America. The lefty continues to show his potential.

“I’m not much for setting goals but one thing that’s important to me is to stay healthy,“ Locke said. “Spring training for me also is time for me to build up for a long season. I take a lot of pride in being ready to go every fifth day, so in spring training it’s so important to be prepared for whatever situation you might come across, or be thrown into. Having the chance to pitch in Pittsburgh last [September] showed me what I’ve worked so hard to get to. We have so much talent on the staff, it was great to learn from those guys last year. I am very excited for the 2012 season.”