McLouth Looking to Bounce Back From Rough Couple of Years 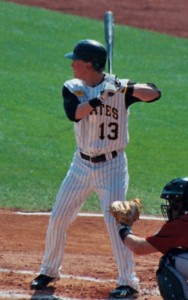 BRADENTON — Since getting traded to the Atlanta Braves in July of 2009, Nate McLouth hasn’t played like the All-Star center fielder and Gold Glove winner that Pittsburgh saw during the 2008 season.

But this year, McLouth is making sure that will change.

After several trips to the disabled list last season and having to undergo sports hernia surgery in August, McLouth played in just 81 games with the Braves.

“I was injured last year and had surgery, so I was in the process of rehabbing that last season,” said McLouth, who is looking to bounce back.

This offseason, McLouth signed with the Pirates to a one-year deal in December, reuniting with the team that not only drafted him, but where he found success.

With just a few days into spring training, it’s still too early to determine how much starting time McLouth will see this season. With Andrew McCutchen in center and Alex Presley and Jose Tabata in left and right field, McLouth becomes a solid bench option, and another speedy outfielder in the mix.

“It’s too early to think about that now,” McLouth said of his role. ” I’m just excited to get going, and get back here.”

McLouth said he hasn’t been working on anything different this offseason, just looking to stay healthy and bounce back.

“I’m just looking to bounce back from a couple rough years. There’s no place I’d rather do it than here.”