A Rotation Full of Prospects at Indianapolis 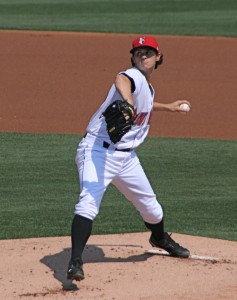 Last year it looked like the Pittsburgh Pirates would have a rotation full of prospects. Brad Lincoln was expected to start the year in Triple-A, while the “Altoona Four” of Rudy Owens, Justin Wilson, Bryan Morris, and Jeff Locke were expected to make the jump to the next level.

Only two of the Altoona pitchers made that jump, with Owens and Wilson getting the call, while Morris and Locke returned to Double-A to get more work at the level. The Pirates also added Brian Burres and Sean Gallagher to the Indianapolis rotation, providing immediate depth should the major league team have needed an extra pitcher early in the season. The Pirates never needed that depth. The only pitcher to go down early in the season was Ross Ohlendorf, and he was replaced by Jeff Karstens.

A year later, we could be looking at a rotation full of prospects in Indianapolis. It may not be an all-prospect rotation like the one you see in the New York Yankees’ farm system. There isn’t a Manny Banuelos or a Dellin Betances in the upper levels of the Pirates’ system. But the Pirates don’t project be entering the season with veteran pitchers taking up rotation spots in Triple-A.

“I think that’s the idea,” Pirates’ farm director Larry Broadway said. “We’ve put a lot of emphasis on pitching in the draft in the last four years since the system got put in place. A lot of those guys are starting to push their way through and be developed to help in the big league club.”

“The ideal is that we can always build within, and our organization has a sustainable minor league system to continue to bring guys up to the big leagues and help us win up there,” Broadway added. “Ideally, yes, we need to sign less six-year free agents to fill holes that we can do from inside.”

The Pirates needed Burres and Gallagher last year in case there was an urgent need for pitchers early in the season. They didn’t project that Lincoln, Wilson, or Owens would be ready to make the jump to the majors. This year they have guys who can immediately step in, should they be needed.

Brad Lincoln and Jeff Locke look like the number seven and eight pitchers in the rotation right now. The Pirates will begin the year with A.J. Burnett on the disabled list, putting their sixth starter, Kevin Correia, in the rotation. Burnett doesn’t look like he will return before the end of April, and possibly later. If the Pirates see another injury before his return, they’ll have to dip in to the Triple-A rotation.

Lincoln technically isn’t a prospect, with 58.2 innings in the majors, just enough to lose his eligibility. However, he still has a major league future. He had the better major league results of the two pitchers in 2011, putting up a 4.29 ERA in eight starts, along with a 24:14 K/BB ratio in 42 innings. It’s not a guarantee that Lincoln could end up in Triple-A. He could find a spot in the major league bullpen, although that’s a crowded situation. In either case, he looks like the number seven starter in the rotation, and the first to step in should someone else go down before Burnett returns.

Locke made four starts in September, and struggled with his command in the majors. He put up a 6.48 ERA in 16.2 innings. Before that he only made five starts in Triple-A. The left-hander worked with former Pirates’ pitching coordinator and current Assistant GM Jim Benedict in the last week, focusing on commanding his fastball and curveball inside against right-handed hitters. His command looked good in the bullpen, although it’s a different situation in an actual game. Some additional experience in Triple-A should do Locke well.

The prospects who aren’t ready for the majors at the start of the year are Rudy Owens, Justin Wilson, and Kyle McPherson.

Owens was the organization’s Minor League Pitcher of the Year in 2009 and 2010. In 2011 he struggled in his jump to Indianapolis, then later dealt with a shoulder problem. He’s healthy now, and a key for his 2012 season will be trusting his stuff.

Wilson was moved to the Indianapolis bullpen last year to work on his fastball command, with the Pirates wanting to give him more frequent opportunities to take the mound and focus on commanding the pitch. He impressed with a fastball that touched 99 MPH, although his command didn’t really improve. The Pirates are moving him back to the rotation this year, and they’ve never counted out his chances at being a starter in the majors.

“Justin is going to go down to Triple-A, and he’ll be in that rotation down there because the key to his future success is fastball command,” Pirates General Manager Neal Huntington said. “We still believe he can be a Major League starter. We still believe he can be a very effective starter. He might be one of those guys that breaks into the Major Leagues as a reliever, but the most important thing we can get from him is fastball command, some delivery adjustments, some refinement.”

The top prospect at the level is Kyle McPherson, who was the organization’s Minor League Pitcher of the Year in 2011. McPherson combined for a 2.96 ERA in 28 starts between High-A and Double-A last year, and will make the jump to Triple-A at the start of the season. If his 2012 season is anything close to his 2011 season, he could put himself in line to make it to the majors by the end of the year.

“Kyle is a guy that we like a lot,” Pirates Manager Clint Hurdle said. “We put him on the [40-man] roster a couple years ago and a lot of people were surprised by that. It was what we’ve seen and believed he could become. He’s certainly in process of becoming that. He projects to go to Triple-A in the rotation. Hopefully continued growth. He pounds the strike zone. He’s got good stuff. He’s fearless and positions himself to be help for us at some point this season.”

You can never have too much pitching depth, and the Pirates will definitely have a lot of depth at Indianapolis this year. That depth will allow guys like Rudy Owens and Justin Wilson to bounce back. It will allow Kyle McPherson time to adjust to the jump to Triple-A. At the same time it will provide the majors with emergency replacements, and not the minor league free agent variety that we’ve seen in the past. In a best case scenario, if the major league rotation is strong and healthy, and enough prospects are doing well in Triple-A, it could provide the Pirates with some trade chips. These are all the benefits of having actual prospects in the Triple-A rotation.