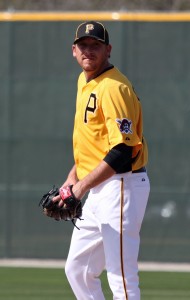 BRADENTON, Fla. — The New York Yankees sent out a tough top of the order against the Pittsburgh Pirates today at McKechnie Field. But it didn’t faze the Bucs pitching staff. The Yankees were held to four runs on eight hits in the Pirates 7-4 win in Bradenton on Tuesday.

“They brought a good ball club over here,” Pirates Manager Clint Hurdle said. “I thought our guys were very efficient off the mound. We threw strikes. Not so much early, but when we got into counts we battled, made good pitches. We limited the damage. We were aggressive on both sides of the plate with fastballs. We had a couple guys with real efficient outings, really good downhill plane. Very good nine inning performance, again, from our pitching staff backing up what we were able to do last night.”

Right-hander Kevin Correia made his first spring start this season after tossing a scoreless inning in an intrasquad game on Friday. Facing the New York Yankees tough lineup, Correia was solid.

“It’s always fun facing guys like that,” Correia said. “I’ve pitched in the National League my whole career, so I don’t get to face those guys a lot. It’s fun. I’d rather face the best than not.”

Correia retired both Derek Jeter and Robinson Cano on four pitches, before walking his next two batters. However, Correia got an opportunity to pitch out of the stretch for the first time this spring, and said he felt good.

“I haven’t dealt with a lot of work from the stretch as of yet, because it’s so early,” Correia said. “But I got into the stretch in the first [after] I walked [Mark] Teixeira on four pitches. It wasn’t what I wanted, but I was just kind of getting the feel of being in the stretch again.”

Correia escaped the inning after getting Andruw Jones to fly out to left field. In his second inning of work, Correia retired the Yankees 1-2-3, holding the Yankees to two scoreless frames, with no hits with two walks.

“It was good,” Correia said of his overall performance. “It was kind of the first real game. That ones always kind of nervous and weird, and you’re just trying to figure it out. I felt pretty calm and pretty good out there.”

“I feel like I still have some things to work on, as most people do this early in spring. My arm feels good. I’m pretty much where I was last spring at this point.”

The Pirates  plated a run off Yankees’ C.C. Sabathia in the first inning, getting three straight hits off the veteran lefty. Jose Tabata scored after All-Star center fielder Andrew McCutchen hit a RBI single up the left side to take a 1-0 lead.

With two outs and Clint Barmes on first in the 3rd, Andrew McCutchen picked up his second RBI –this time by hitting a double into deep right center field to give the Pirates a 2-1 lead.

The following inning, the Bucs plated a third run of the game after Nick Evans hit into a fielders choice, allowing Neil Walker to score on the error by first baseman Mark Teixeira.

“We had a little conversation before the game yesterday –about our focus and about our purpose,” Hurdle said of the Bucs bats being more energetic the last several games. “We’re at McKechnie now. It’s the second stage of spring training. Games are on, competition, play, represent, those things that we talked about…We executed better. We played better baseball. We’re doing better things.”

The Pirates tacked on a run in each the 7th and 8th innings before the Yankees attempted to rally back in the top of the 9th.

Righty reliever Daniel McCutchen got into a jam after Gary Sanchez reached on a fielding error by third baseman Jake Fox. McCutchen gave up a single to center and a walk to load the bases, then David Adams ripped a two-run double down the left field line to cut lead, 7-4. But McCutchen got Melky Mesa to pop out to short to end the game.

* Tomorrow marks the first time the Pirates will not be using a designated hitter.