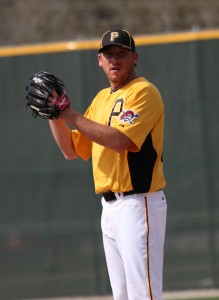 BRADENTON, Fla. — Right-hander Kevin Correia continued his solid spring on Friday at McKechnie Field in the Pirates 3-2 win over the Philadelphia Phillies. The 31-year-old made his third start, and over four scoreless innings, Correia gave up just one hit with a walk and two strikeouts. He has yet to give up a run over his combined 9.0 innings in the Grapefruit League.

“He’s been pretty much been following the glove all spring,” Pirates Manager Clint Hurdle said. “Very pitch efficient again today. He had 10 out of 14 first pitch strikes. The best nugget for me today was he retired eight hitters on three pitches or less. 46 pitches in four innings. He had one three ball count, that was the leadoff walk in the fourth inning. He followed the ball. He spun the ball very well. Threw some cutters and kept the ball down. He’s repeating his delivery, good tempo, good pace. It was a real good outing today.”

The lone hit that Correia gave up was a ground rule double to the Phillies’ Pete Orr with two outs in the 2nd inning.

“Everything feels good. I’m throwing the ball pretty much in the vicinity that I’m trying too. And right now, that’s the most important thing for me,” Correia said. “Today it was just a matter of trying to be a little more efficient. I think I’ve thrown alright my other outings. I think my pitch count was a little higher than I wanted it to in my previous outings in spring trainings. Today I was a lot more efficient.”

Center fielder Starling Marte leadoff the game with a home run off the Phillies’ lefty Cliff Lee. It marked the third long ball by Marte in the Grapefruit League. The 23-year-old prospect is now batting .500 this spring and has 11 hits in his last 20 at-bats.

“What he did was hit balls that were left out over the plate,” Hurdle said. “He’s doing well. We like everything we’ve seen from him. He takes a fierce swing. He’s been very confident at the plate. Against Cliff Lee, it’s no secret. You need to be ready to hit, number one. You’re going to get strikes, number two, so you take it from there.”

Lee, a Cy Young Award winner and All-Star, was impressed by the young prospect.

“I know he’s been swinging it pretty good,” Lee said. “A pretty good leadoff hitter. He’s fast and he’s got some power. From what I saw, he looked pretty good.”

Although Marte is having a torrid spring, he will not break camp with the Pirates. Marte finished the 2011 season with career-highs in average (.332), hits (178), doubles (38) and home runs (12) at Double-A Altoona and is slated to start the season in Triple-A Indianapolis.

“We’re not going to change our mind,” Hurdle said. “We want a complete package when he comes up here. He’s got some work to do. This is a spring training look at him.”

With one out in the 3rd, Marte picked up his second hit off Lee. This time, a single into center field. Clint Barmes followed with a single up the left side. Marte scored his second run after advancing to third on a wild pitch and a RBI ground out by Casey McGehee.

Jake Fox, who pinch hit for Correia, connected for a solo-homer to left center field off Lee to start the 5th frame. Fox, who is battling for a utility/bench job with the team, picked up his second long ball of the spring.

Right-hander Bryan Morris came in for the save in the bottom of the 9th inning, but did so by giving up two unearned runs. Morris hit his first batter by a pitch, then Montanez reached on a throwing error by third baseman Matt Hague. Morris walked his second batter to load the bases before issuing a sac fly and giving up an infield single.

With the 3-2 win, the Pirates have now won three games straight.

“I haven’t seen any gun readings, but he looked fine,” Hurdle said. “He said he felt much better. He’s ready to go.”