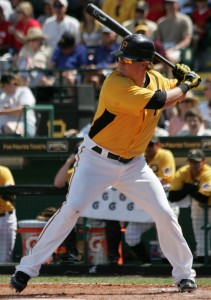 BRADENTON, Fla. — Trailing 1-0 to the Boston Red Sox at McKechnie Field on Wednesday afternoon, the Pirates rallied for four runs off lefty Jon Lester in the 3rd inning.

Josh Harrison ripped a leadoff double down the left field line to start the frame. Harrison, who finished the day 2-for-3, is hitting .579 (11-for-19) with a team-leading six doubles this spring. All-Star center fielder Andrew McCutchen followed by hitting a RBI single to right to tie the game at 1. McCutchen picked up his 10th RBI, which leads the team. For the fourth straight hit off Lester, Neil Walker connected a RBI single to left to score McCutchen from second to take a 2-1 lead.

Matt Hague crushed an 0-2 pitch from Lester for a two-run shot to left field for his third long ball of the spring. Hague, who is battling for a backup utility job this spring, has seven hits in his last 13 at-bats and has gone 12-for-28 (.429) in his first 14 games.

“His bat obviously is the tool that’s showed up for him throughout his minor league career,” Hurdle said. “It’s showing up now. He was able to hit another homer today…He’s given us good at-bats pretty much consistently throughout the spring.”

Nate McLouth, who replaced McCutchen in center, hit a two-run homer off Red Sox’s Andrew Bailey to put the Pirates up 6-5 in the eventual win.

Right-hander Kevin Correia allowed four runs on eight hits over five innings in his fourth Grapefruit League start of the spring. He struck out one batter and picked up a double at the plate.

“I was pretty efficient today, as far as pitch count was concerned,” Correia said. “After I gave up a couple runs, I was able to get some quick outs. I very easily could have went a few more innings if it was a regular season start.”

Correia said he threw 56 pitches during his five inning outing. His goal was around the 80 pitch mark. Like lefty Erik Bedard said after his outing yesterday, Correia will shoot for the 100 pitch mark before they leave spring training.

After tossing a scoreless first, Jarrod Saltalamacchia hit a leadoff double off the wall in left field to start the inning top of the 2nd inning. With one out, Josh Kroeger hit a RBI single into right field. The run scored ended Correia’s 10.1 scoreless streak this spring.

“They were hacking early,” Correia said. “I threw some good first pitch fastballs down, and they got a few hits on them towards the end. That’s the most aggressive team I’ve faced so far in spring.

Correia retired the Red Sox in order in the third. After giving up a leadoff double to Adrian Gonzalez, Saltalamacchia took the first pitch over the right field wall for a two-run homer in the 4th.

The Red Sox tied the game at 4 after Gonzalez picked up his double off Correia which went over the head of McCutchen in center to score Kevin Youkilis from first.

“Those were both really good pitches,” Correia said. “He’s just such a good hitter. With the wind blowing to left, he can hit a fly ball to left better than anybody. He just barreled up a couple pitches that I kind of fooled him on, but he’s good enough just to turn them into doubles. He’s just a different talent.”

Throughout the game, the Pirates struggled with several base running mistakes. Josh Harrison was caught stealing twice, both times he slid past the bag at second. Casey McGehee was picked off at second base and Correia was caught in a run down between second and third base. Hague was also out trying to steal home plate.

“The stolen base decisions were fine,” Hurdle said. “The base running gaffs we had were in game. We made some bad decisions. We gave away two outs in between second and third, one at home, as far as running the bases. Harrison was safe. He slid by the bag. We got to get him to slide earlier. He was safe both times and slid by the base. It’s something that’s got to be addressed…We’ve got work to do, but I like the aggressive nature as far as the base stealing.”