It’s Just a Matter of Time for Marte 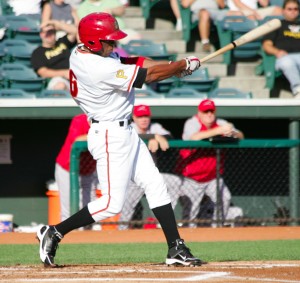 BRADENTON, Fla. — Outfielder Starling Marte was impressive this spring. Over 12 games during the Grapefruit League, Marte hit .520 with three homers, four RBI and stole two bases. If fans weren’t aware of the young prospect, they took notice. Marte even went deep off former Cy Young Award Winner Cliff Lee, but despite his torrid spring with the Bucs, it was just 25 at-bats.

“Overall, he made a very good impression,” said Pirates Manager Clint Hurdle, who had only seen tapes of Marte before spring training. “To be able to put your eyes on him for that length of time. There are five tools developing there. We’ve encouraged him to let that speed tool show up every day. Let that arm tool show up everyday. There’s going to be days when he doesn’t get on base. What can you do with your leather then? You can win a game so many different ways. To find ways to win games isn’t all based on swinging the bat.”

“He’s just got to continue to work, strike zone recognition, spin recognition. And understand now that he’s going to be a lightning rod also. A lot of questions are going to come his way. He’s got to understand what he’s getting asked, professionally, and expect to answer these questions. And then just go play and have a blast doing it.”

In a closed-door meeting with Hurdle, and General Manager Neal Huntington on Sunday morning prior to the Bucs 1:05 start against the Minnesota Twins, Marte was told the news that he would be optioned to Class AAA where he would start the season.

Marte, 23, who is the Pirates top outfield prospect, was interpreted by third baseman Pedro Alvarez. In Marte’s first big league spring training, he said there wasn’t anyone in particular that he learned the most from, just tried to gain a little bit of knowledge from everyone.

“[It] feels good to have the opportunity to be up here, to be able to do well, and to learn from a lot of the guys up here,” Marte said. “[I] wasn’t discouraged. [I] was just grateful for the opportunity. [I] know that if [I] keep working, that [I’ll] have a chance.”

Marte said he is eager to start the season in Triple-A Indianapolis, which is just a phone call away from the big leagues. But the biggest thing he needs to work on before getting the call is his command of the strike zone.

“He showed that when he commands the zone, and he hits his pitch, he can hit just about anybody,” Huntington said. “And that was fun to see. He continued to show that he needs to refine his strike zone command. His attack of his pitch is his strength. His ability to barrel balls that aren’t good pitches is a challenge at times. That’s going to be his biggest challenge in Triple-A.”

“On the bases, he has the chance to be an impact base runner, but we still got some work to do there. Obviously love the guy. And really excited about him and his offensive upside. His chance to come up here and make an impact, but we’ve got work remaining.”

In Marte’s second to last game as a Bucco, he went 2-for-4 against the Philadelphia Phillies, two of those knocks coming off All-Star pitcher Cliff Lee. In his first at-bat, Marte took Lee for a leadoff home run to left to start the first frame. In the 3rd, Marte battled Lee again, this time for a single into center field.

“Cliff Lee gave up a home run to him, he gave up a single to him, then he showed that he’s Cliff Lee in his last at-bat,” Huntington said. “There will be a point in time where even the best in the game gets shown by Cliff Lee, and that he’s still Cliff Lee, one of the best pitchers in our game. There were some great things to build on. We’re excited about the future. We’ll see where that future comes.”

Marte is coming off a huge 2011 season at Double-A Altoona, where he led the Eastern League in batting average (.332), hits (178)  and doubles (38). Marte also became the first player in the Curve’s 13-year history to capture the Eastern League batting title. He was named the Eastern League Rookie-of-the-Year and set a single-season club record with 178 hits, breaking Nate McLouth’s previous record of 166 in 2004.

Opening up the season in Triple-A, Marte will play primarily in center field for the Indians. He will also play some left field, sharing the two positions with Gorkys Hernandez, who was also optioned to Indianapolis on Sunday.

“Obviously we’ve got a center fielder that we plan to be here for a long time,” Huntington said. “We need two center fielders. We’ve said that from day one coming in here. If we have two-plus defensive outfielders that can also swing the bat, and be productive for us offensively then we’re going to be in great shape.”

How long Marte will stay in Triple-A before getting the call to the Majors is unknown. With a crowded outfield already consisted of Alex Presley, Andrew McCutchen, Jose Tabata and Nate McLouth, the organization does not plan on rushing the young prospect.

“His development, his progression, it may be all year,” Huntington said. “Maybe he comes into camp next year competing to make the club. Need is a big part of it as well. We’ve still got work to do. 25 at-bats doesn’t mean he’s ready to make the Major League team. As good as those 25 at-bats were. There’s a lot longer career track record that shows that we’ve got work to do.”

So what exactly as Marte told to work on during the closed-door meeting on Sunday?

“To keep working the way [I’ve] been working at it,” Marte said. “It’s just a matter of time.”