McCutchen Was Meant to Be a Pirate 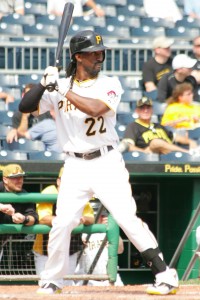 BRADENTON, Fla. — While playing baseball in High School at Fort Meade High School in Fort Meade, Fla., Andrew McCutchen’s school colors were black and gold. Maybe it was kind of meant to be for McCutchen to be a Pittsburgh Pirate.

“Maybe I’m a little partial just because my colors were black and gold in high school too,” McCutchen said during his contract press conference at McKechnie Field. “I didn’t have to change my colors. It was just meant to be. I’m definitely honored. I’m definitely humbled. They always say don’t let it change you, and I don’t believe that it will do that. I’m just going to remain the same. Just go out and show up everyday and give it 100 percent for my team, do everything I can do to help  my team win.”

On Tuesday, the Pirates announced that they have agreed to terms on a six-year contract worth $51.5 million with McCutchen, with a club option for the 2018 season. McCutchen, 25, is the second of the Pirates core players that have signed a long-term deal. Last August, outfielder Jose Tabata signed a six-year extension for $15 M which included three club options.

“I really haven’t’ had time to sit back and think about what’s happened,” McCutchen said. “It still somewhat feels like a dream to me…It’s almost like getting drafted all over again. It’s almost like being married, and renewing your vows. I feel like that’s kind of how it feel for me, right now, at this moment. It’s one of those things where they ask you how you feel about the situation, and right now, I just can’t give an explanation to it. It just hasn’t set in to what’s happened. But I know that it’s definitely amazing.”

“God has blessed me with the ability to perform at a Major League level, and to be able to have this,and  to be able to work this deal out. I’ve always said I definitely want to be here. I always wanted to be here. This is where I was drafted. I’m an hour up the road. You go down 64, you make a left on 17, you’re in my hometown. It’s right there. It feels like I’m home.”

The press conference, which was held at McKechnie Field in Bradenton today, was flooded with media surrounding the All-Star center fielder. Fans who were already at the field for the 1:05 start against the Yankees, watched from the bleachers as McCutchen and the Pirates Owner and General Manager discussed the bright future now with McCutchen in it.

McCutchen, who was drafted in the first round of the 2005 Draft, was named to the National League All-Star team in 2011 and is widely regarded as one of the top young players in the game. Since making his debut in June of 2009, McCutchen has found a permanent home in center field with the Bucs.

“This is a huge and excellent step forward,” Pirates owner Bob Nutting said. “I think we’re willing to make this kind of commitment because Andrew’s been not only an elite center fielder with a great future, but also a great leader in our clubhouse, an inspiration to me, and others in the organization…We’re not signing a baseball player, we’re signing a person that we believe in deeply, that we trust, and that we respect as a human being.”

McCutchen led the Pirates in home runs (23), RBI (89) and stolen bases (23) in 2011, becoming just the eighth player in team history to collect at least 20 homers and 20 stolen bases in the same season. His 89 RBI last season ranked second behind Matt Kemp (123) among National League center fielders.

When young players sign big contracts it can be a good thing, or a bad thing, depending on how the player handles the situation. But Hurdle is confident that McCutchen understands the commitment to the organization, and believes it’s a win-win situation on both parts.

“I’ve seen it happen both ways,” Hurdle said. “I’ve seen players that it absolutely frees them up…I’ve also seen some other players kind of go the other way it and think now they’ve got added burden and responsibility. Can I do more? And then they get outside of themselves. We’re very confident that Andrew understands the commitment that’s been made to him. We understand the commitment that he’s made to us. It’s a win-win.”

In his first three seasons in the Majors, McCutchen has recorded a .276 batting average, 95 doubles, 19 triples, 51 home runs, 199 RBI, 78 stolen bases and a .365 on-base percentage in 420 games. With the six-year extension, fans will be able to see McCutchen’s speed on the base paths and covering ground in center for many years to come.

*Video courtesy of the Pirates.