McDonald Struggles with Command in Loss to Twins 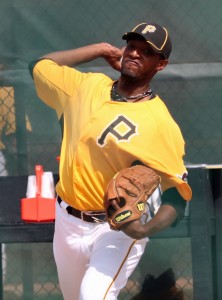 BRADENTON, Fla. — Right-hander James McDonald’s last trip to the mound on Saturday against the Houston Astros was impressive. McDonald tossed 5.1 of hitless ball, and overall allowed just one run on two hits over 7.0 innings. He didn’t walk a batter and struck out three while throwing 75 pitches.

McDonald fared much differently in his fifth start during Grapefruit League action of the spring on Thursday afternoon at McKechnie Field. Overall, McDonald allowed 10 runs on seven hits over 3.2 innings. He walked seven batters, struck out one and gave up two long balls.

“It’s not frustrating. It’s baseball,” McDonald said. “I’ve had days where it’s worse. Some days, I’ve made those same pitches, and I ended up giving up one run. One day you can be on top of the word, the next day you can be down. You got to learn how to just go out there next time and compete.”

McDonald started the game with back-to-back walks, with three overall in the first frame. After getting Alexi Casilla caught trying to steal second base, Ben Revere, the leadoff walk, advanced to third. Revere then scored on a ground out by Danny Valencia.

“There’s times whether it be your warm-up, or your time on the mound you don’t have your ‘A’ game, things aren’t right. You’ve got to adapt, improvise, and overcome the best to your ability,” Pirates Manager Clint Hurdle said. “That was the exercise for him today. He needed to go out and find a way to do the best he could with what he had. He threw 83 pitches. It wasn’t about punishing anybody. It was about needing to get work done, needing to find away to still get something out of today. He went out there and pitched. It wasn’t effective. The command was off.”

In the 2nd, McDonald walked the leadoff batter for the second time in as many innings, then gave up a two-run shot to right field to Brian Dinkelman.

McDonald was able to get through the 3rd inning unscathed, but gave up seven more runs in the 4th, which started off with five straight hits. After allowing a leadoff single to Dinkelman, Brian Dozier connected for a two-run homer, the second of the game allowed by McDonald to left field. Casilla hit a sac fly to left to plate the third run of the frame. Luke Hughes picked up a two-out RBI with a single up the middle.

“I didn’t make the adjustment,” McDonald said. “The last game I was able to make that adjustment. Step back, get back into focus. Today I kind of let things speed up, and I didn’t really step off the mound and get that focus. Luckily it was a spring training game to learn from, rather than a September, August or even next week when it counts.”

After walking his seventh batter over his 3.2 innings, Hurdle went to righty Daniel McCutchen from the ‘pen. McCutchen gave up a two-run double to right, then a RBI single to short by Dozier to give McDonald a final of 10 earned runs.

“Bad day,” McDonald said. “I didn’t have my good stuff. Sometimes these days happen. I’m lucky it was spring training, so I’m happy about that. The day overall was a battle. I left the ball up in the zone.”

“He needed to find away to make an adjustment out there,” Hurdle said. “He did at times, but not with the consistency that he’s going to need to moving forward. This is the point of the growth in the big leagues. Some days you just got to get out there. Some days you end up wearing it a little bit. There are things to be taken from it to learn.”

McCutchen gave up an earned run in his second inning of work in the 5th, a RBI double off the wall in left center field to Chris Parmelee.

With one out in the 1st, Josh Harrison drew a walk and advanced to second on the single up the left side by Jose Tabata. Neil Walker picked up his fifth RBI of the spring with a base knock to right.

The Pirates tacked a run off Twins’ Casey Fien in the 7th inning after Greg Picart (minors) doubled in Adalberto Santos (minors).

Third baseman Pedro Alvarez picked up his second hit of the game with a single up the right side in the 8th. It marked his seventh hit of the spring (.167 average). Matt Hague hit into a fielders choice to plate the fourth run of the game.

Garrett Jones scored the Pirates fifth and final run in the bottom of the 9th after the Twins’ reliever Esmerling Vasque balked.