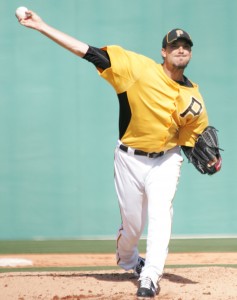 BRADENTON, Fla. — Right-hander Charlie Morton threw in an intrasquad scrimmage held at Pirate City on Wednesday morning. The 28-year-old was pulled after throwing 1.1 innings due to reaching his pitch count, but continues to progress back from offseason hip surgery.

“It was okay,” Morton said of his outing. “I got a little out of sync. I think I was trying to do a little too much when I walked [Andrew] Lambo, as opposed to staying aggressive in the zone. I felt good in the first inning with locating my pitches, my sinker and my cutter. Walks are no good. Hits are no good.”

In his first inning of work, Morton struck out his first batter, then gave up an infield hit to prospect Jarek Cunningham, but quickly picked him off first base.  Morton got Casey McGehee to pop out to end the frame.

In the second, Morton issued a one-out walk to Lambo, then gave up back-to-back singles before getting pulled. Overall, Morton allowed one run on three hits with a walk and strike out. Morton threw 29 pitches, 17 of them for strikes.

“I knew we were trying to do somewhere between 30-35 [pitches],” Morton said. “I think in that situation where I’m not throwing my pitches for strikes really and really just kind of looking out there becomes a kind of thing where it’s like, alright, we’ll get those pitches in, and then get him out of there before it gets really bad.”

Morton said he will pitch in a game next week at McKechnie field. Morton will throw a side on Friday, to get on a set schedule for the rest of spring training.

“I’ll start a five-day schedule and see where I wind up. The next outing will be crucial,” he said.

“It’s harder because I feel like everything is happening a lot quicker. I started playing catch in December. I feel like every throw that I make is more crucial than just going through the program where we’re putting in two extra, three extra weeks of throwing just to be throwing and get my arm strong. Right now I feel like every pitch, when I get the ball I really, really have to make it count. And that’s why it was kind of frustrating. It was kind got away.”

With right-hander A.J. Burnett out likely two to three months due to undergoing right orbital surgery, Morton said he doesn’t feel pressure to rush through spring training in order to be ready in the rotation for opening day.

“I feel like I want to do my job and feel I can do my job,” Morton said. “That’s the pressure I feel, not because of somebody else. It’s because I want to pitch, I want to be ready and do my job. That’s it…I really don’t let it affect me. I wanted to be ready from day one, on day one.”