Pirates Break Out the Lumber in Win over Twins 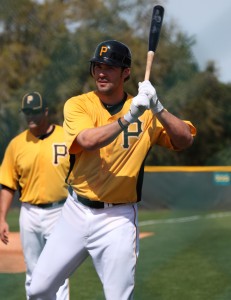 FORT MYERS, FLA. — You could say it was over quickly after it began. The Minnesota Twins right-hander Terry Doyle lasted just 2/3 of an inning in the Pirates 17-6 win at Hammond Stadium on Thursday. The Bucs hammered out 10 runs on 10 hits with two walks a hit batter and an error in the 35 minute top of the first inning.

“We just brought out the lumber today,” All-Star center fielder Andrew McCutchen said. “That was pretty much it. We went out and swung it. That’s the way it goes. People start hitting and the next thing you know, it’s a domino effect and everybody wants to get out and start getting hits. We were able to let it rip today.”

Alex Presley and Casey McGehee each had a pair of hits in the top of the first, while McGehee and Garrett Jones knocked in two runs a piece. Overall, 15 batters came to the plate off Doyle and reliever Anthony Swarzak. The entire lineup, expect for Eric Fryer who was hit by a pitch, collected at least one hit in the half inning.

“You’re not going to see those type of innings very often,” Pirates Manager Clint Hurdle said. “Just connected the dots throughout the lineup. Good at-bats. Presley busted his backside getting down the line, opened the inning up. Guys got pitches they wanted to hit and they didn’t miss them.”

The Pirates now have had collected 10 or more hits in eight of their last 10 games.

Alex Presley, who entered the game hitting .375, hit his first home run of the spring in the 3rd inning. Presley finished the day going 3-for-4 with three runs and two RBI and how now reached base safely in seven of his first nine games this spring.

In the next inning, Matt Hague picked up his second home run of the spring on a 2-2 pitch off Twins’ righty Phil Dumatrait in the 4th. Hague, who is battling for a backup utility/bench job this spring, went 3-for-4 with two runs and a RBI, entered the game batting .353.

In the 5th, designated hitter Garrett Jones hit a solo-homer to right field for the third long ball by the Bucs. Jones is hitting .400 this spring.

“I’ve had some homers here at this field,” said Jones, who with the Twins organization from 2002-08. “I’ve played here a lot. I felt good today. Just trying to use my hands, trying to get good at-bats, good pitches to hit and put good swings on it. I felt like I was over swinging the first two at-bats, but I was able to shorten up and make the adjustment.”

“I was looking for a pitch and wanted to drive it hard and I was able to get one. Felt good.”

Lefty Jo-Jo Reyes made his second start (third appearance) of the Grapefruit League this spring. He allowed four runs (three earned) on five hits over 2.1 innings. Reyes walked two with no strikeouts.

The Twins plated three more runs (two earned) off Reyes in the bottom of the 2nd inning. Wilkin Ramirez reached on a fielders choice and then scored after Span hit a single to right field. Catcher Joe Mauer connected for a two-run single to left.

After tossing a scoreless first inning of relief, right-hander Juan Cruz’s gave up a run in the bottom of the 5th inning. Trevor Ploufee hit a double and scored on a double in the gap in left center by Luke Hughes.

“He’s got experience,” Hurdle said on Cruz. “The arm is still alive. He’s got velocity. There’s still some movement, and he’s got two pitches that he can go to for put always.”

The Pirates tacked on three more runs off the Twins’ in the 8th inning. Jake Fox, who replaced Fryer as the catcher, hit a two-run double. Brandon Boggs also picked up a RBI with a knock to score Fox in the 17-6 win.