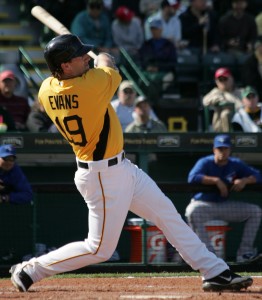 BRADENTON, Fla. — With just a week until Opening Day at PNC Park on April 5 in Pittsburgh, prior to the Pirates 1:05 start against the Minnesota Twins, the club reassigned infielder Nick Evans, Jake Fox, catcher Eric Fryer and right-hander Ryota Igarashi to Minor League camp.

Pirates General Manager Neal Huntington said he hopes to retain all four of the players to Triple-A, and each could have a chance to help out the club at some point this season.

“We actually hope to retain all four that went out today,” Huntington said. “We expect that they are going to help up at some point this year. A ton is made of Opening Day, but there’s going to be changes by the time we get to June 5, by the time we get to August 5. We went through way too many players last year. We hope to not come anywhere near that number this year, but we are certainly going to use more than 25.”

“Each of these guys brings a different level of value. Some have had better springs than others, some we brought to camp hoping they compete to make our club, they’ve done that, but they didn’t make our club. We still think they are going to help us.”

Evans, 26, was under strong consideration to make the club out of spring training, but was disappointing with the bat this spring. The infielder hit just .111 over 15 games (3-for-27) during Grapefruit League action this spring. Evans signed a minor league deal with the Pirates in November. He hit for a .256 clip with the New York Mets during the 2011 season.

“With Nick, he obviously just had a tough camp with the bat,” Huntington said. “When we signed him, we felt that he was going to have a great chance to make our club because he can bounce around the field, play a bunch of different positions, and swing the bat well. He didn’t have as good of a camp as he wanted, nor we’d hoped.”

Fox, 29, like Evans, was battling for a spot on the Pirates bench this season. Although Fox swung a good bat this spring, .269 average with two homers and five RBI, Fox wasn’t as efficient on defense. Fox spent the 2011 season both in Triple-A and with the Baltimore Orioles, where he .275 and .246.

“Jake had a better camp with the bat,” Huntington said. “As we told Jake, we had a lot of guys have good camps from an offensive standpoint, from a defensive standpoint. We had some guys that we felt were more versatile, or a little better defensively that we liked similar with the bat that are still in camp, that are sill in competition. There wasn’t anything that Jake didn’t do. It was just a matter of we had some guys really do some good things.”

Fryer, 26, will be the primary catcher for Triple-A Indianapolis to start the season. Fryer, who can also play third base and right field, could return to Pittsburgh at some point during the season. The 26-year-old made his Major League debut in 2011 and appeared in 10 games with the Pirates. Fryer made a huge jump to the Majors after starting the year in Double-A Altoona.

“Out of the chute, he’ll be the guy at Triple-A, and he’ll get a ton of at-bats down there as [Jose] Morales gets healthy,” Huntington said. “Eric’s had a very good camp. He’s done a good job both defensively and offensively. One  of the better people we have in our system. There’s a lot to be said for that. He’s worked hard to continue to get better. He’s worked hard to continue to improve. We feel very good about our catching depth with him and once we get Morales healthy. We feel really good about our catching depth.”

Morales was reassigned to minor league camp last week and has been battling a left oblique strain since the start of spring training. Once healthy, the two will split catching duties in Indianapolis.

“He’s getting back into game activities,” Huntington said on Morales progress. “He’s played a few minor league games [at Pirate City]. He’s coming along OK. It’s not 100 percent yet. We’re still working through. We’re still looking for sometime in April for a return for him.”

Igarashi, 32, allowed nine runs on 15 hits over 9.1 innings in relief this spring. He walked three and struck out 10 during Grapefruit League action. Igarashi spent the 2011 season with the New York Mets organization before pitching 11 seasons with the Tokyo Yakult Swallows of the Japanese Central League.

“Igarashi is a veteran,” Huntington said. “He comes from a lot of success and a lot of years in Japan. We’ve got an understanding with him that if there is a better spot for him, then we’ll let him go somewhere else.”

Igrashi said he will talk with his agent and determine other options or if he will accept the Pirates assignment to pitch in Triple-A Indianapolis. At this point he said he is undecided.

“[I] was shocked about the news,” Igarashi said through Erwin Valencia, the Pirates Physical Therapist and Rehab Coordinator. “But at the same time, [I] did everything [I] could have done up to this point everyday, but the result wasn’t there…[I] was told to be more consistent and they want to see [my] split used more. Also they want [me] to get back to where he was when he was at his best.”

The Pirates active spring training roster is currently at 30.