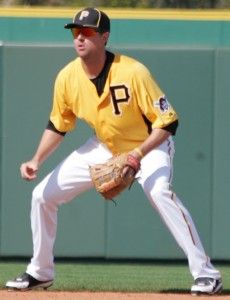 BRADENTON, Fla. – With just eight days remaining until the final Grapefruit League spring training game for the Pirates, the club took a step further to their final 25-man on Saturday. Prior to the their game against the Houston Astros, the Pirates cut five players from big league camp: infielder Jordy Mercer, and non-roster invite pitchers Shairon Martis, Jo-Jo Reyes and Doug Slaten and catcher Jose Morales.

Mercer, 25, was added to the Pirates 40-man roster over the offseason after a solid 2011 season. Mercer hit .255 with 30 doubles, 19 home runs and 69 RBI over 132 games with Double-A Altoona and Triple-A Indianapolis. The former 3rd round pick in 2008, who was drafted as a shortstop, will start the season at Triple-A Indy, where he will primarily play second base.

“Right now, Chase [d’Arnaud] is going to get the primarily opportunity at shortstop, partially because we’ve got more work to do there with Chase then we do with Jordy,” Pirates General Manager Neal Huntington said. “Jordy’s more accomplished at shortstop today as we sit here right now…Jordy may be one of those guys that breaks into the club as a guy that bounces around, as a role player. So his comfort level at second and third is going to be important for him. He’s also got to continue to swing the bat, continue to advance as an offensive player.”

Martis, 25, signed a minor league deal with the Pirates over the offseason in November and appeared in four games this spring training with the Bucs. Martis allowed two runs (unearned) on six hits over 4.2 innings. He didn’t walk a batter and struck out two.

“Jo-Jo just had one of those springs,” Huntington said. “We had and still have high expectations for Jo-Jo. We still believe he’s going to help us at some point this year in a variety of roles. We’re looking to continue to help him get better. To help him to get back to where he was, a guy that made 25 starts in the big leagues a year ago. He didn’t have a very good camp. He knows it. He’s looking forward to get going.”

The decision on whether Reyes will pitch in the starting rotation or pitch in relief in the minors has not yet been determined.

“We still got some moving pieces and parts, depending upon what happens at the end of camp here,” Huntington said. “We got a lot of good arms down there. Part of it will be in Jo-Jo’s control, and what he does to put him in the position to be in the rotation. But a part of it may be out of his control depending on what our other alternatives are.”

Reyes was working with a new arm slot this spring in order to be more consistent with his delivery. Reyes said that he was still uncomfortable and working through the change.

“It was an adjustment that he and we felt that would help him,” Huntington said. “Some guys take to it right away, and some guys take a little bit longer time. I think with Jo-Jo he’s trying to lock that in. Sometimes guys got to take a small step back to take a big step forward. We give him a lot of credit that he was willing to take that shot and take the chance of taking that small step backward. We’ve talked a lot about it’s not where you start, it’s where you finish. He’s bought into that mentality, and he’s trying to lock in those mechanical adjustments that we’re working on with him. That we believe will help him consistency and allow his stuff to play better  than it has and allow him to take that next step for us.”

Morales, 29, didn’t appear in a Grapefruit League game this spring with the Pirates. The catcher has been sidelined with a left oblique strain since the start of spring training.

The Pirates currently have 34 players remaining in Major League camp.