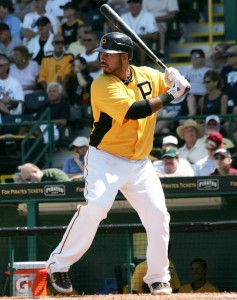 BRADENTON, Fla. — Third baseman Pedro Alvarez is looking for consistency this spring. During the 2-1 loss to the Tampa Bay Rays at McKechnie Field on Saturday, Alvarez went 0-for-3 — all three were strikeouts. Over his past two games he has gone hitless. But just last week, Alvarez connected for two opposite field home runs.

“Today he got into some receptive swings early,” Pirates Manager Clint Hurdle said. “Especially off [Rays right-hander James] Shields. He was very deceptive for us today. He changed speeds extremely well. Seemed like when we’re looking hard, he threw soft. When we were looking soft, he threw hard. There’s been some games where Pedro’s been locked down, swinging well. We just got to keep working with him to find that consistency and that balance.”

So far this spring Alvarez is batting .174 over 10 games (24 at-bats). The Pirates said that he will get the first crack at third base to start the 2012 season.

Right-hander Jason Grilli tossed two scorless innings against the Tampa Bay Rays on Saturday, and has now pitched six scoreless frames so far this spring. Over 28 games with Pittsburgh last season, Grilli pitched in high leverage situations and long relief, showing off his versatility. The Pirates bullpen is still undetermined heading into spring, but Grilli’s versatility can be a huge asset to the club.

“He showed us in the short time that he was with us last year his versatility,” Hurdle said. “There were a number of times he went two innings. A couple times he went three innings. Then he’d pitch the eighth inning. He’s pitched in every role out there except for closer. With every one of our relievers, we’ve asked to get up to two innings earlier than the last week. Just to stretch them out and give them an opportunity to throw all their pitches. His opportunity was today and he handled it very well.”

Infielder Matt Hague has been one of the big story lines this spring training. The first baseman, who has been working on his versatility at third base, has had a solid spring in his first big league camp. The 26-year-old is batting .409 with two homers and five RBI.

Hague is battling for a backup utility job with the club. Although Hague’s potential may be under the radar to some, he’s not to the Pirates’ skipper Clint Hurdle.

“I’m not surprised [on his success] based on the information from I get from the people that don’t have him under the radar, the people that have watched him play,” Hurdle said. “He’s a very professional hitter. He’s worked hard to get better on defense. He hadn’t spent a lot of time at third. We’re trying to stretch him out at third. He’s going to play eight innings or so in the ‘B’ game tomorrow.”

“He gives you good at-bats. You saw another good at-bat today. He battles. I think he’s understanding now that he gets a little older, there’s times when you need to get up and go ahead and let it go a little bit. He’s not been one that’s hit with a lot of power throughout the minor leagues, but he’s a very good hitter. He’s understanding that when he’s got a shot to take it every now and then. He’s driven some balls already this spring. Very well.”

Right-hander Jeff Karstens was solid in his second official spring training start on Saturday. Karstens allowed one run (a solo homer) on three hits with three walks and five strikeouts over five innings. So far this spring, Michael McKenry has caught all of Karstens games and bullpens. But today, Karstens threw to Rod Barajas, a veteran of parts of 13 seasons in the big leagues, and was encouraged by his results.

“Working with Rod for the first time, he was really encouraging,” Karstens said. “You hear a lot about him as a catcher, and as a person from A.J. [Burnett] and other guys who have thrown to him. To throw to him for the first time today was a tremendous help for me. Just that alone right there gave me the confidence that during the year I can trust whatever he puts down.”

“I woke up this morning thinking I was throwing to McKenry, Rod caught yesterday. It’s always nice to throw to the starting catcher because he’s the one that’s going to be back there the majority of the time. You want to have a good feel with them. You don’t want the first time to be during the season. I can’t say enough about the job he did today. Just kind of getting me through that because early it wasn’t very nice and we were able to get out of some sticky situations.”