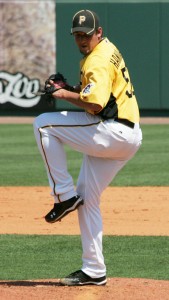 FORT MYERS, Fla. — Pirates closer Joel Hanrahan is looking to incorporate his slider more for the 2012 season. And so far, his results have been impressive this spring. Over three appearances, Hanrahan has tossed three scoreless, hitless frames with one walk and six strikeouts.

The Pirates’ closer relied on his slider a lot during the 2010 season to get guys out, but last year he didn’t use it as much. His fastball, which clocks in the high 90’s, was his weapon of choice for 2011.

“His slider — the year before I got here, it was unbelievable,” Pirates Manager Clint Hurdle said. “Last year he didn’t use it as much. He tried throwing it a little bit later in some situations. The slider seems to be taking much better form early this year than at any time last year. He’s thrown a number of them already.”

This spring, however, Hanrahan is reaping the benefit of using both.

“It’s something that we wanted to try and hybrid the two guys,” Hurdle said. “The fastball, when you’re having it and it’s working, it’s great. But you want to lose a pitch. He had it one time and I think he just kind of lost it, misplaced it, didn’t need it. I think he understands that it can be a benefit as well. He’s really focused on trying to just really command that pitch to the best of his ability, and his fastball command is always going to set everything else up.”

First baseman Garrett Jones went 3-for-4 with a run, home run and four RBI on Thursday in the Pirates 17-6 win over the Minnesota Twins in Fort Myers. This spring, Jones is batting .400 with two homers.

“Anytime there’s head movement forward, your depth perception gets thrown off, your inability to recognize spin can be challenged. He just sees the ball when he’s quiet up there.”

Left-hander Erik Bedard pitched against the Toronto Blue Jays High-A ball club at Pirate City on Thursday. Hurdle said the reason on why lefty Jo-Jo Reyes got the start against the Minnesota Twins in the big league game today was because Bedard was going to make the club this spring, and they wanted to see Reyes up against stiffer competition.

Bedard gave up on hit and an unearned run over three innings with a walk and four strikeouts. He threw 51 pitches, 37 for strikes over his three inning outing.

Sanchez Likely to Start in Double-A

Catching Prospect Tony Sanchez was reassigned to minor league camp on Thursday, where he will get regular playing time to get ready for the new season. Sanchez, a first round pick in 2009, will likely start the season in Double-A Altoona unless he has a great spring in minor league camp. Sanchez is looking to bounce back from a disappointing 2011 where he hit just .241 in his first full season in Class-AA.

“As we’ve talked about it right now, likely Altoona with the idea that it’s where he finishes, not where he starts,” Pirates General Manager Neal Huntington said. “We want to do some things with him offensively. Obviously defensively he’s done some things this spring. His blocking. His throws the other day against Philadelphia, as good as you’re going to find. A lot of encouraging things there. We’ve seen some things with the bat. Obviously the home run way back in the first intrasquad. The impact is better than it’s been. We want to make sure we get off to a good start with him, have him graduate that level. If we ultimately feel that these next two weeks he’s ready to go to Indianapolis, that’s great. But our focus is where he finishes, not where he starts. He’s taken some great steps forward.”

Sanchez was one of 10 cuts that the Pirates made prior to their 1:05 game against the Minnesota Twins in Fort Myers, Fla.