Pirates Notebook: Wilson to Move Back into Rotation 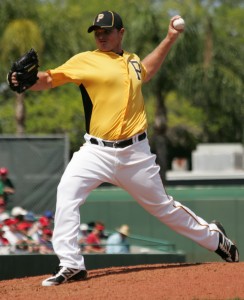 FORT MYERS, Fla. — After deciding to cut pitcher Justin Wilson from big league spring training camp on Sunday, the Pirates optioned the hard throwing lefty to Triple-A Indianapolis, where he will  start the 2012 season back in the starting rotation.

“Justin is going to go down to Triple-A, and he’ll be in that rotation down there because the key to his future success is fastball command,” Pirates General Manager Neal Huntington said. “We still believe he can be a Major League starter. We still believe he can be a very effective starter. He might be one of those guys that breaks into the Major Leagues as a reliever, but the most important thing we can get from him is fastball command, some delivery adjustments, some refinement.”

“As he goes forward, the best way to do that is for him to repeat it a lot during a game. Also to have the side work. Whether it’s flat ground, whether it’s his bullpen work. We felt the best thing for Justin was to go down and start again for two reasons: Number one, Because we believe he can be a Major League starter, and number two, because it’s more work, it’s more practice time.”

During big league camp, Wilson was used as a reliever. He made four appearances with the Pirates allowing two earned runs on four hits over 5.2 innings. Wilson’s biggest issue was his command this spring, walking seven batters while striking out six.

“Obviously we love the velocity,” Huntington said. “We love the arm strength, and the power. He showed a power slider at times, but he also showed that he’s got work to do. He showed the glimpse of what he can be, but we definitely got a ways to go with him. We need to get him to Triple-A and get him continuing to developing and refine the mechanics, and become more consistent in the strike zone.”

After starting the 2011 season in the Indy rotation, Wilson posted a 4.24 ERA over 21 starts (110.1 innings). In August, Wilson was moved into the bullpen, where he stayed the remainder of the season, posting a 3.21 ERA over nine appearances. While in the bullpen, Wilson saw his velocity reach several ticks higher than his average 94-95 MPH fastball.

In his second big league spring training, Wilson said he learned a lot from the experience. Despite the news of getting optioned to the Minors in a closed-door meeting with skipper Clint Hurdle and pitching coach Ray Searage, Wilson has a bright future ahead.

“You want to be successful now. I’ve got to learn to just wait my time, I guess, develop pitches and get ready for this season,” Wilson said. “Yeah, it [stings]. Even the first guy sent down that might not have any chance making the team. It stings, but it’s all part of it.”

Veteran catcher Rod Barajas, who signed a one-year deal with the Pirates with a club option for the 2013 season, will be the Bucs starting catcher for this season. But the amount of games caught behind the plate will depend on his health.

Barajas spent last season with the Los Angeles Dodgers, where he started 85 games behind the plate. He missed close to a month while recovering from a right ankle sprain. The Pirates plan to be careful with his workload this season. Barajas hasn’t caught more than 100 games in the Majors since 2009 with the Toronto Blue Jays. Huntington said that they expect him to catch anywhere from 90-110 games.

“We’ve talked since the day we signed him somewhere 90-100, 110,” Huntington said. “We know that his best impact on us is when he’s strong, when he’s fresh. We know that he’s going to have to stay on a pretty regimented schedule as far as getting some rest. We can’t run him out there [every day]…When he’s swinging the bat well, we’ve got to avoid the temptation of running him out there for five straight days, or seven straight days, or eight straight days. We’ve got to make sure we monitor him and get him the anticipated time off. No different from the day we signed him.”

McLouth Will Get Playing Time in Outfield

The Pirates signed outfielder Nate McLouth to a one-year contract over the offseason to be the teams fourth outfielder. McLouth, who has played the majority of his Major League career in center field, will not be on any set schedule to give the outfielders days off.

“I know Clint’s going to work Nate in, and try to match him up as best we can, try to keep him sharp,” Huntington said. “Clint does a great job of keeping our bench players involved. That’s one of the many things he does well is keep our bench players sharp and involved and ready to step in. It’s not just that the other guys are tired. It’s because he wants to give somebody else proactive rest, but he also wants to make sure that the guys that are important to us stay sharp, and stay ready for us to help win the game…I don’t know if there will be a set schedule, but I know Clint will be active in making sure that Nate stays sharp, and making sure we keep those other guys fresh and strong.”

Prior to Sunday’s 10-0 loss to the Minnesota Twins, the Pirates starting staff posted a 3.34 ERA after their first 14 games. Right-hander Kevin Correia has been arguably the best this spring not allowing a run over three starts (9.0 innings).

“They’ve thrown strikes. They’ve changed speeds. They’ve read swings,” Huntington said. “We’ve had guys that had great spring, then haven’t been very good. We’ve had guys that had terrible springs and they’ve been pretty good. We’ve also had good springs lead to good seasons, and bad springs lead to bad seasons. It is spring training. Guys go out and maybe there working on a change-up today.”

“Joel Hanrahan had a brutal spring last year. It was probably one of the best things for him because he really pounded his fastball command. It helped him tremendously. It helped set him up for a great season because he learned some things about his fastball and that was outstanding. His success in 2010 was based heavily on his slider, and his ability to get hitters to swing and miss his slider. Last year, his success was a lot due to fastball command. When you start commanding a 95 mph fastball to go with a wipeout slider, you get an All-Star caliber closer.”

Right-hander Evan Meek has bounced back from his first rough outing of the spring with three scoreless innings of relief. Although his velocity still isn’t back up to his All-Star shape (95-97), the Pirates are seeing good things from him this spring.

“Evan is continuing to get comfortable, and continuing to build arm strength, which is a big thing for him,” Huntington said. “We’ve got tremendous in our bullpen. We’ve got a large number of guys for a small number of spots. Evan is right in the middle of that.”