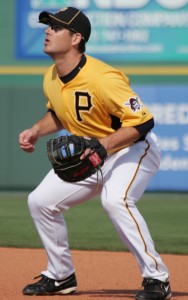 BRADENTON, Fla. — Prior to the club’s 1:05 start against the Boston Red Sox at McKechnie Field, the Pittsburgh Pirates reassigned four players to minor league camp.

Cabrera battled right forearm tightness this spring, which limited his chance to make the Pirates bullpen. The 30-year-old righty missed the 2011 season with Tommy John surgery. In one Grapefruit League appearance this spring, Cabrera allowed a hit and a walk over a scoreless frame.

“He hasn’t pitched in a year,” Pirates Manager Clint Hurdle said last week on Cabrera’s chance for a spot in the ‘pen. “You got to be optimistic, but you need to be realistic. The fact that he spent the time working and getting himself back where he’s out competing, that’s the biggest step for him…It was a long shot coming in, but the fact that he’s healthy, we like having him in the organization.”

“The health is the biggest thing. The guy’s had success in the big leagues. The arm’s live, and there is more arm there then what we’ve seen from him so far. It’s just that transfer from bullpen work to game work…He’s got a presence. He lets it fly. It can be very challenging.”

Clement, 28, appeared in just 22 games with Triple-A Indianapolis last season after undergoing left knee surgery in September of 2010, which was the third knee surgery of his professional career (Also in 2006 and 2008). This spring, Clement went 0-for-9 with two walks and struck out once.

“He’s had some tremendous challenges in the past,” Hurdle said. “He’s a guy that’s had some success also, well thought of. It’s a good skill set, whether it fits as a left-handed bat off the bench. Obviously there’s a depth chart in place. He’s got to work through that. I’m just happy for him that he’s worked hard, the perseverance has paid off.”

There are now 39 active players in Major League camp, including 9 non-roster players. The Spring Training Tracker is updated with the moves.