Presley One of Several Bucs with the Green Light 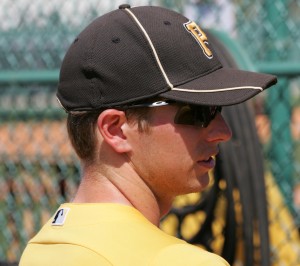 SARASOTA, Fla. — Last season combined with both Pittsburgh and Triple-A Indianapolis outfielder Alex Presley swiped 31 bags –using his speed to his advantage. This year you may just see Presley steal even more bases. He’s one of the few Buccos that have a green light on the base paths this season.

The others? Andrew McCutchen and Jose Tabata. The Pirates other speedy outfielders.

Being giving the green light is something that Presley enjoys too.

“I like the green light because it shows that [Pirates Manager Clint Hurdle] has confidence that I can decide to do things on my own,” Presley said. “If he wants me to go, he’ll give me the sign. So I get kind of the best of both worlds.”

“What I try and find out to do is what they are more most comfortable with,” Hurdle said. “I’ve had guys that loved the green light, and given the green light they were smart with it, aggressive with it…Then there’s guys where their comfort zones are better when they get the steal signs from the manager. That’s what I need to figure out. I think I’ve got a much better read on it this year than I did last year. The green light will be out for a number of guys as well again this year.”

Both McCutchen and Presley didn’t wait long to start running on the bases either. McCutchen swiped two bags on Friday’s intrasquad game at McKechnie Field, Presley picked up one of his own.

Over the offseason, Presley said improving his base stealing was something he worked on during the Fall Instructional League at Pirate City in Bradenton, Fla.

“We worked on it a little bit, just like jumps and technique-type stuff,” Presley said. “It was something we did, bunting and base stealing.”

“I think the guys now, they have a better understanding [that] once they get to the point where they got a green light and they’re out, they’re not going to get put to the wall and ask 30 questions on why they were out,” Hurdle said. “It’s on me with a green light. It’s on me with a steal. At the end of the day, everything falls back on the managers lap. The trust has picked up.”

“Alex spent a good amount of time that weekend [in Bradenton] out there working on leads and breaks. We already got that part of the game back in play, getting him up, getting him going.”

Hurdle said he doesn’t just expect McCutchen, Presley and Tabata to run. He said there is also a lot more guys here at spring training that he wants to see crank it up and go this spring.

“We want to see Gorkys Hernandez run, we want to see [Starling] Marte go, and [Robbie] Grossman,” Hurdle said.”There’s a bunch of guys we want to see elevated. It comes with a feel for the game. Obviously now that they’re in the big leagues, sometimes you can get overly concerned about making an out…Then you put it in the process of where we were offensively last year. It was tough to give up outs once we got on base. That’s their mindset as well, but I’m looking at the big picture, and I want to continue to push that envelope. I want us to be smart with it and I want us to be aggressive as well.”

So just who just is the fastest Bucco on the bases? Presley said that if he, McCutchen, Tabata, Marte and Chase d’Arnaud were to race it would be fun to watch.

“It would be close,” Presley said as he looked over his shoulder to d’Arnaud’s locker just a few stalls down.

“He’s not sitting there,” Presley said laughing. “I’d like to think I’d be right up there. I would be. But me or Cutch.”