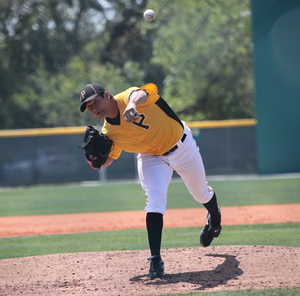 Nathan Baker was drafted by the Pittsburgh Pirates in the fifth round of the 2009 draft. He spent the last two years in A-ball, playing in high-A during the 2011 season. This year Baker will be making the jump to the Double-A level, starting in the Altoona rotation.

The Pirates sent Baker to the Arizona Fall League over the off-season to give him some experience against upper level hitting. The left-hander had some inconsistent results, putting up a good outing, then following that with a poor outing. He largely struggled with his control and command throughout the process, some of which could have been due to entering the fall league with a career high in innings.

Baker and Altoona pitching coach Jeff Johnson have been working over the off-season and during the spring on preparing for the upcoming jump to Altoona, with a focus on his command.

“There’s a big difference between Single-A and Double-A,” Baker said. “And I think the main thing is being able to read hitters. I think that’s one thing that me and [Altoona pitching coach Jeff Johnson] are focusing on this year. And also just keeping the ball down. That’s the biggest thing I think.”

Baker threw five innings today at Pirate City, going up against Toronto’s Double-A team. He was hit hard, giving up four runs on seven hits, with a walk and three strikeouts. The left-hander threw 77 pitches, with 46 going for strikes.

Normally you see Pirates’ pitchers throwing mostly fastballs. Baker threw a lot of change-ups today. His change-up is his best pitch, and it worked today against an aggressive Toronto team.

“On any given day if my change-up is on, I think I’ll usually feel pretty good,” Baker said, also adding that he probably should have used his change-up more in today’s outing.

That’s what makes his command issues a problem. Baker has struggled with his fastball, elevating the pitch at times, which led to a lot of hard hit balls today. He struggled throwing the pitch for strikes in the AFL, but didn’t look as bad in that department today, mostly struggling to keep the ball down. In order to have success in the upper levels he’s going to need to master that command.

His change-up is a good pitch, but it can only be so effective without good fastball command. If Baker could improve his command, and keep the ball down on a consistent basis, then he’d have a mix of pitches to be a back of the rotation starter in the majors. If he doesn’t improve that command, he might have trouble finding success in the upper levels.

Duke Welker made some big strides last year with his control. The right-handed reliever had horrible numbers in 2010, walking almost a batter an inning. He turned things around in Bradenton during the 2011 season, cutting his walk rate in half. That was followed by a strong finish in Altoona, with one walk in ten innings.

“I think just kind of letting go a little bit,” Welker said about what led to the turnaround. “Trusting what I’ve been practicing with what all of the guys have been teaching me, and just letting go and playing.”

Welker has his 98 MPH in the past, and was sitting 95-96 MPH today against Toronto in a shutout inning of relief. The right-hander throws a four seam fastball which can act like a two-seam fastball at times when he throws the pitch inside. He also throws a hard slider, which might be his best pitch.

“It’s a good pitch for me to fall back on,” Welker said of his slider. “I’ve trusted that for a while, it’s been my bread and butter.”

The Pirates added Welker to the 40-man roster over the off-season, a move that was made to protect him from the Rule 5 draft. The team didn’t want to take the risk of another team taking a flier on his arm. There’s good reason for the protection. His fastball/slider combo gives him the stuff to eventually be a late inning reliever, and maybe even a closer candidate.

Welker will return to Altoona to start the 2012 season, but has the stuff to move quickly through the upper levels, especially if he continues improving his control.

**Baker was throwing 90-92 MPH with his fastball today.

**Michael Colla went four shutout innings in the Triple-A game, allowing two hits, no walks and striking out four. He was mostly throwing his fastball, sitting around 90-91.

**Brandon Boggs crushed a home run to right field in the Triple-A game. Boggs projects to be the starting right fielder in Indianapolis at the start of the year.

**Victor Black was throwing 92-95 MPH today, but was wild. That’s a trend I’ve noticed in almost all of his outings this spring.

**Some good base running today by Gorkys Hernandez. He stole second base, and later worked his way out of a pickle between second and third. He was caught in the back-end of another pickle on a close call at third, moving off the bag while the opposing team was focused on the runner between first and second.

**Just based on some of the pitches in the video below, I was impressed with how well Ramon Cabrera frames pitches.

**Chase d’Arnaud took a lot of ground balls from Pirates infield coordinator Gary Green while today’s games were going on. He was working and second and at short, making the throws to first base, and to second base. Earlier today I wrote about how the Pirates are trying to make him fundamentally sound. You can see a video of d’Arnaud taking ground balls on my blog post from earlier today.

VIDEO OF THE DAY

Here is the second inning of action for Nathan Baker today.