Sanchez Working Hard to Bounce Back 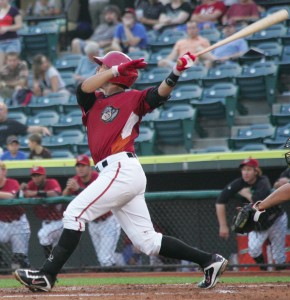 SARASOTA, Fla. — The 2011 season was not what Tony Sanchez expected from himself. The 23-year-old catching prospect worked hard over the offseason in order to bounce back.

Sanchez finished last season hitting .241 with 46 runs, 14 doubles, five home runs and 44 RBI in his first season at Double-A Altoona. Sanchez, who was drafted by the Pirates in the first round of the 2009 draft out of Boston College, hadn’t hit below a .300 average in his prior two seasons in the Bucs minor league system.

Despite the disappointment at the plate, the catcher took some strides forward while with Altoona in 2011.

“My defense took some strides forward [last year], and my game calling was a little bit better,“ Sanchez said. “I want to improve upon all that. I also want to be the guy that drives in runs. The teammate that my guys know is going to get the job done. For me, that was the hardest part of last year, not being that guy.”

Hard work is starting to pay off.

Sanchez went 2-for-2 on Monday throwing out runners attempting to swipe second base. Sanchez caught Phillies’ Kevin Frandsen and Tyson Gilles in the 8th and 9th innings trying to steal a bag, catching the eye of Pirates Manager Clint Hurdle

“For me, the price of admission today paid to two throws by Tony Sanchez,” Hurdle said after the game on Monday. “I don’t know if anybody was going to ask me about those, but I think we need to talk about those. You’re not going to see many catchers unload quicker than that more accurate with the velocity he had on those two. They were both 1.85 release time, glove side to the ball at second base. He’s had a much better spring, a much more comfortable spring. He’s receiving the ball very well. He gets down to his knees quicker than anybody I’ve ever had. It’s fun watching. He’s finding his comfort zone a little bit.”

Although the stats didn’t count towards spring training, Sanchez came up big in his first at-bat in game action this spring by taking the first pitch from righty reliever Jared Hughes over the center field wall for a three-run bomb in the 7th inning of the Pirates intrasquad game a week and a half ago.

“It just goes to show hard work in the off-season pays off,” Sanchez said. “Obviously everyone knows about the lack of power of the offense last year and it was nice to see that I can drive the ball again like a man. That was actually the first thing I thought about running the bases: Oh, there it is. Finally. I’ve waited a year for the ball to sound like that off the bat. It felt good.”

Over the offseason, Sanchez bulked up, gaining about 15 pounds. The added weight was to keep his strength up both behind and at the plate.

“A lot of the things that they made us do in the mini camp, what they sent us home with was a pretty good regimen,“ Sanchez said “As long as you followed it, and did it daily, you would come out with good results. That’s what I did”

“If there were days that I was tired, or days that I didn’t want to wake up in the morning, I forced myself to wake up and go to the gym. I knew I couldn’t have another year like I did last year. So that’s what I did. It’s helped out so far, and I’m keeping it going now. Although, it’s a lot harder, keeping it going as often as I did in the offseason, I’m still trying to get in there as much as possible.”

Getting in better shape will also help Sanchez behind the plate. Sanchez said that he would drop about five pounds a game when he was the starting catcher. Over the lengthy season, his weight dropped down to 208 pounds.

“Last year was tough because I didn’t know how to keep weight on and I’d lose five pounds a game. It was ridiculous,“ Sanchez said. “They would force feed protein down my throat. I was sick of it. This year, instead of waking up at 11:00 [AM] and then heading straight to the stadium with Subway, I’m going to have to wake up at 9:00 [AM], get a big breakfast in me, then go to the stadium and have a second meal. Then have another meal in between the game and when we start. Then obviously eat after the game. With protein shakes and protein bars mixed in between there.”

“It’s almost going to be seven to eight meals a day. You burn 5,000 to 7,000 calories a game. Especially if you’re catching. That’s all you do, you sit back there and you drip sweat. It’s ridiculous. It’s squatting for three hours. You do lose a lot of weight and it’s hard to maintain that. I can’t get down to 208 again. I can’t do it.”

Sanchez was in his third big league spring training since being drafted in 2009 before being reassigned to minor league camp today. The catcher has had the experience for several years of learning from the veterans, but a few at-bats the last two springs, he has been given a little more game action this year. Over six games, Sanchez is 1-for-7 with a walk.

Last year Sanchez said he learned a lot from former Buccos Ryan Doumit and Chris Snyder. This spring, he is learning from a few new guys.

“I have guys like [Rod] Barajas, [Michael] McKenry and even [Eric] Fryer has experience at the big league level,“ Sanchez said. “I even listen to Fryer now, and I’ve been with Fryer for three years. Barajas and McKenry are great. They both have a lot to teach. Obviously, Barajas has been in the league a lot longer than Mac has, but they both know a lot. They both are so open to teaching me. They take us all under their wings, and they teach us how to go about our business and how to take care of our pitchers, what to do in different situations. It’s been awesome. They are so easy to talk too. Anytime I have a question I can go up to Rod or Mac, and I just ask. They’ve both done so much for me already that I feel like I’m in a better situation now then where I was last year.”

Sanchez was reassigned to minor league camp on Thursday, where he will get regular playing time to get ready for the new season. Sanchez, a first round pick in 2009, will likely start the season in Double-A Altoona unless he has a great spring in minor league camp. Sanchez, too, is looking to bounce back from a disappointing 2011 where he hit just .241 in his first full season in Class-AA.

“I want to be the hitter that when I get on the top step, everyone is excited to see hit again,“ Sanchez said “I was that guy, and last year I didn’t feel like that. That’s what I want to get back to.”

“As we’ve talked about it right now, likely Altoona with the idea that it’s where he finishes, not where he starts,” Pirates General Manager Neal Huntington said. “We want to do some things with him offensively. Obviously defensively he’s done some things this spring. His blocking. His throws the other day against Philadelphia, as good as you’re going to find. A lot of encouraging things there. We’ve seen some things with the bat. Obviously the home run way back in the first intrasquad. The impact is better than it’s been. We want to make sure we get off to a good start with him, have him graduate that level. If we ultimately feel that these next two weeks he’s ready to go to Indianapolis, that’s great. But our focus is where he finishes, not where he starts. He’s taken some great steps forward.”