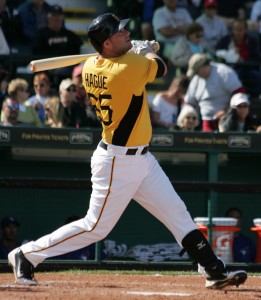 KISSIMMEE, Fla. — The battle for the backup utility/bench job looks to be a tough competition during the final week of spring training. Other than the starting nine, the club has five spots for bench roles. Nate McLouth is a lock for the fourth outfielder, Michael McKenry will back up Rod Barajas at the plate, and the club will go with Casey McGehee in part of a platoon at first base with Garrett Jones. That leaves two positions open for the corner infield/bench roles.

Five players remain for the final two spots, but realistically the competition comes down to three: Matt Hague, Josh Harrison and Yamacio Navarro. And all three have had hot springs.

On Sunday, Pirates General Manager Neal Huntington said he would be comfortable bringing either Josh Harrison and Yamaico Navarro north. Both of whom can play second, short and third.

“They’ve both played well defensively,” Huntington said. “They’ve worked hard. I’m not sure I’ve seen two infielders we’ve given more back field time than Yamaico and Josh have gotten with [Third base coach and infield coach] Nick [Leyva] this spring. He’s done a great job with those guys. It’s about being able to bounce around the diamond.”

Hague, who has played primarily at first base since 2009, has been working hard on his versatility. He played third base during winter ball this offseason as well as during Grapefruit League action this spring.

“Matt Hague can bounce back and forth between first and third,” Huntington said. “We’re giving some options for Clint [Hurdle] for some guys on the bench. Some guys are going to swing the bat, some guys that can run a little bit, some guys that can play a bunch of different positions defensively. That’s always beneficial for a Manager to have some versatility and bat off the bench.”

Huntington did mention, however, that Hague is at this point in time the club’s fourth option at the hot corner.

“In multiple inning, double switch situations that arose and Matt needed to go to third, he’d handle it. He handle it okay,” Huntington said on Hague playing third. “He’s probably third or fourth option at this point in time behind Pedro, behind Harrison, behind Navarro [defensively].”

As far as extra outfielder, if needed, Garrett Jones could be used in right, a position he played last season with Pittsburgh. Navarro also has seen Grapefruit League action in right field this spring. Both Hague and Harrison have been getting pregame work in the outfield as well.

“We’re going to have some decisions to make down the stretch,” Huntington said. “We’ve got some good options off the bench.”

During the final stretch of spring training, the competition will continue to heat up. Pirates Manager Clint Hurdle said he could see a lot of different things with his options, but they will continue to evaluate.

“I’m just not going to sell out anything now with the discussions we’re having,” Hurdle said. “We’re glad we got Navarro. We’re glad we got Harrison. It’s hard not to be happy with the way Hague’s playing as well. We’re going to let them keep playing and we’ll keep evaluating.”