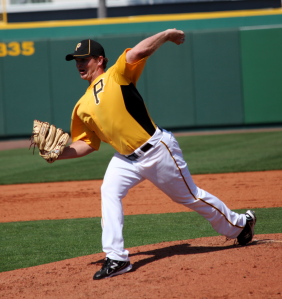 BRADENTON, Fla. — Lefty Justin Wilson took the mound at Ed Smith Stadium in Sarasota, Fla. on Monday night for his first outing of the spring. After walking his first batter, the 24-year-old settled down and looked impressive in his 2012 spring debut.

“I had some jitters,” Wilson said. “Especially with the first hitter. It’s always nice to get out there and once I slowed things down, I felt good and just wanted to keep throwing strikes.”

“The first batter, I’m sure he had some nerves,” Pirates Manager Clint Hurdle said. “Whether it’s spring training, it’s the first time this kids got on the mound. It’s a big league game to him. Four quick balls, then boom, he went to work. It was good to see him repeat his delivery, downhill plane with that velocity. It’s hard to hit. It’s hard to square up.”

Wilson went on to strike out three of his next five Oriole’s batters over his two scoreless, hitless frames in relief.

“The arm’s big,” Hurdle said. “The consistency of the arm, the command of his pitches is something he’s continued to work out to improve. He did two role’s last year. He started, finished up in the bullpen. The arm played big in the bullpen. The velocity has actually been higher than that [94-95 last night] at times. That’s a fresh arm, sitting on 95 a whole handful of pitches, fastball pitches. He got sharper the longer he stayed out there.”

During Wilson’s outing he was regularly hitting 94-95 on the gun. The hard throwing lefty said that is his normal velocity when he is starting, but can ramp it up even higher when in the bullpen. Wilson hit 99 MPH on several occasions out of the bullpen in Indianapolis at the end of the 2011 season.

“Last year out of the ‘pen it was higher than when I was starting,” Wilson said. “I’m just kind of getting used to all that and how the arm feels. We’ll see.”

After posting a 2.55 ERA in April while with Triple-A Indianapolis to start the 2011 season, Wilson posted a four-plus ERA over the next three months before being moved into the bullpen to finish out the remainder of the season. Wilson said he isn’t sure whether his role for 2012 will be in the ‘pen or back in the starting rotation.

“I just know I’m going to throw innings in spring training and to be ready for whatever,” he said.

Despite having a down year, Wilson is still regarded as one of the top Pirates lefty pitchers in their system. After being Rule 5 eligible over the offseason, the Pirates added him to the 40-man roster protecting him from getting drafted by another team. Wilson is looking to bounce back this year and break camp in the Bucs ‘pen or make his Major League debut at some point in Pittsburgh in 2012.