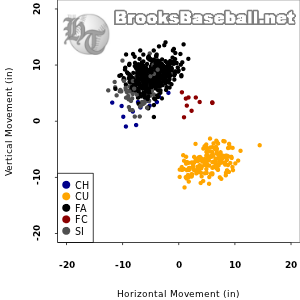 Lynn is a hard-throwing, 24-year-old right-hander that misses plenty of bats, which has led to excellent strike out numbers early in his major league career. He throws his four-seam fastball in the 91-93 range, and reached as high as 97 MPH while pitching in relief last season. The pitch has been pretty untouchable to this point, with a whiff rate that stacks up well with some of the best fastballs in the game. His big-breaking 80 MPH curve is probably his second best pitch, although he has struggled to miss bats with it so far in the big leagues. Lynn’s repertoire is rounded out with a low 90’s sinker, a mid 80’s changeup and an upper 80’s cutter. He has not needed these pitches too often as a reliever, so there is not much data available on them. It will be interesting to see how he incorporates them into his arsenal now that he is in the rotation. 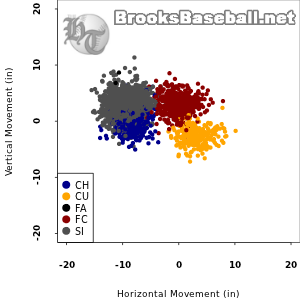 Westbrook pitches to contact and does not miss many bats, with a strikeout and overall whiff rate that are both well below average. He lives on his plus sinker, a pitch that sits around 90-91 MPH and generates a ton of ground balls. His 80 MPH changeup also shows good sinking movement, which also helps him keep batted balls on the infield. He mixes in a mid to upper 80’s cutter and a curve that ranges from the upper 70’s to the low 80’s. His change and cutter are his only decent swing-and-miss pitches at this point, although his curve missed a good number of bats in his younger years. Westbrook led the majors with a 59.3% ground ball rate in 2011, and has continued his ground ball ways with a 60.5% rate thus far in 2012. 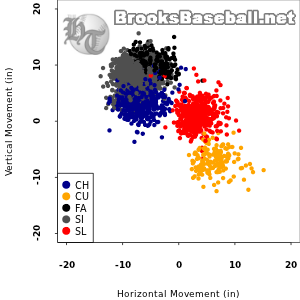 Lohse is a right-hander with very hittable stuff. He throws a sinker that sits in the 88-89 range and gets up to 92 MPH at times. His best pitch is probably a circle change that sits around 80 MPH and generates a whiff rate near league average. The rest of his pitches are regularly put into play. In fact, in 775 batters faced in 2011, his sinker only generated about 31 swings-and-misses. It also does not produce as many ground balls as one would expect from a sinker. Lohse also throws a low 80’s slider and mixes in an occasional (and very hittable) slow curve. He generally works on the outer half of the plate, but sometimes will come inside on both left-handers and right-handers with the sinker.